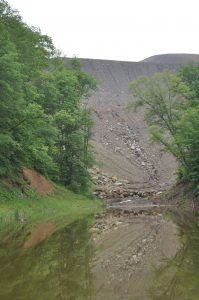 On Feb. 1, the U.S. House of Representatives invoked a seldom-used procedure to strike down the Stream Protection Rule. The Senate followed suit the next day.

The rule, enacted by the U.S. Department of the Interior in the final days of the Obama administration, offered modest steps toward protecting streams from surface mining.

The Office of Surface Mining Reclamation and Enforcement worked on the rule since 2009. It required increased water monitoring and forest reclamation, among other provisions to update the 1983 stream buffer zone rule.

“I have watched the creek that flows past my grandmother’s home in Floyd County, Ky., become ruined by the strip mining above it. I used to catch crawdads in that creek, but now it smells and looks noxious,” said David Wasilko, of Kingston, Tenn., in comments submitted to the federal office that wrote the rule. “There is no life in the water and the terrible odor permeates the entire hollow. Citizens of the coalfields deserve the best possible Stream Protection Rule that the OSM can provide.”

The 1996 Congressional Review Act, the tool used against the Stream Protection Rule, allows Congress to block federal regulations within 60 congressional days of their passage and makes it difficult to write “substantially similar” rules in the future. It had only been successfully used by Congress once in the past.

“We have failed to protect the families in these communities, and passage of this bill will inflict another blow to their health and wellbeing. They deserve far better,” Rep. John Yarmuth (D-KY) told fellow members of the House.

As of press time in early February, members of Congress have challenged at least a dozen other rules using this law. Also at risk is the Methane and Waste Prevention Rule requiring oil and gas companies operating on federal and tribal lands to decrease the amount of natural gas that is vented each year into the atmosphere.

On Feb. 1, the House also struck down a regulation passed by the Obama administration that required oil, gas and mining companies to report payments from foreign governments, according to the Washington Post.

Read more about the ongoing fight for clean water on our Front Porch Blog.