Editors’ Note: The following was released by the Alliance of Carolinians Together (ACT) Against Coal Ash in response to Duke Energy’s plan to provide alternate drinking water sources to resident with contaminated well water living near coal ash sites. The plan includes a $5,000 “goodwill payment” for families with contaminated wells, but only for those who sign a waiver saying they won’t sue Duke Energy in the future. 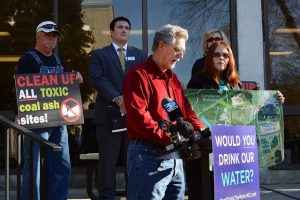 Citizens rally in N.C. to call for clean-up of toxic coal ash pits across the state.

On Friday the 13th, Duke Energy released a “goodwill” offer to residents on wells near the company’s coal ash sites. To many residents, however, the ominously timed release is more hush money than it is an act of goodwill.

According to what residents have read in the media, Duke’s offer comes with conditions: in exchange for the money, residents must forgo their right to sue Duke over groundwater contamination in the future.

“A goodwill offer doesn’t come with strings attached; this is a contract, a contract to silence residents” says Debbie Baker of Belmont, near the G.G. Allen power plant. “Duke is trying to keep people from challenging them before they even put clean water lines in place. Also, I worry about my son’s future health issues if he were to start getting sick.”

Duke has said for years now that a “one-size-fits-all” approach to cleanup is not appropriate, yet it is offering a one-size-fits-all approach to this goodwill offer, says Deborah Graham, a resident in Dukeville near the Buck Steam Station. “The $5,000 goodwill offer is the same whether the property is rented, vacant, or has multiple units on it. Each family and household is different, and some will bear more of the transition to water lines than others.”

“I am glad that Duke Energy is acknowledging goodwill and property devaluation with compensation. However, $5,000 is not a fair amount to neighbors of coal ash basins across the state and does not begin to address any of the issues families have been dealing with over the past two years,” says Amy Brown of Belmont. “I still have young children living in the home, why would I jeopardize future generations by signing away my rights to challenge Duke on future groundwater contamination concerns? Duke Energy is trying to place a $5,000 price tag on my past, present, and future groundwater contamination concerns. This is an attempt to limit our ability to protect our families.”

Duke wants to cap the remaining coal ash pits in place, a method that is less expensive but does not prevent continued damage to nearby groundwater and health. The company is doing everything it can to lock that option into place. Capping in place the remaining sites would leave nearly 70 percent of the ash where it is — in some places, that means leaving it sitting in the groundwater table. Residents are concerned that the coal ash left in the ground will continue to leak and present a serious health risk to the general public, leading to more expenses down the line that Duke Energy’s offer doesn’t begin to cover.

Meanwhile, coal ash is in demand from the North Carolina concrete industry. Reprocessing coal ash into concrete is a promising technology. But without cooperation from Duke Energy to reprocess ash from the state’s largest coal ash dumps, the industry is forced to import ash from India and China.

“Why should North Carolina import toxic coal ash when we have nearly 150 million tons right here?” asks Caroline Armijo of Residents for Coal Ash Cleanup. “It seems shortsighted to lock away all of the toxic ash from recycling if it can be done safely. We know there is a lot of research on better ways to store or reuse coal ash safely, so why doesn’t Duke Energy pursue those options? Or at least allow other industries to do so.”

Duke’s goodwill package also provides for Duke making up the difference in fair market value if homeowners are forced to sell below value to due the stigma of contamination. “Who would want to buy here now anyway, what will they do if we simply cannot sell? Will they buy our homes? What happens then?” asks Kenya Morgan of Dukeville, near the Buck Steam station.

Morgan adds that Duke Energy is putting the costs of dealing with its coal ash on consumers. “Consumers like us — the neighbors of the coal ash pits — will be the ones paying because Duke Energy stated they plan to raise rates to cover costs. We pay, we lose!”

Neighbors also feel many more questions about Duke’s offer have been raised than answered. “What they released in the press is misleading, incomplete and written with too many loopholes,” says Roger Hollis, who lives near Duke’s Cliffside plant in Cleveland County. “It is written so that all the consumer sees are dollar signs, with no mention of all underlying costs and future costs such as taxes, fees, installation and permit fees and health care issues. This is typical Duke Energy — deceiving and misleading the public.”