BREAKING: Scott Pruitt’s confirmation vote to head the EPA goes to the Senate on Wednesday, Feb. 1.

Given President-elect Trump’s fossil-fuel-friendly philosophy and dismissive position toward climate science, it’s no surprise that many of his Cabinet appointees take positions that threaten public health, air and water quality, and our natural heritage, and that accelerate climate change.

As a region with astounding biodiversity and natural assets, Appalachia has a particularly large stake in environmental protection. And with the coal industry’s track record of pollution, the environmental and health consequences of fracking, and the encroachment of fracked-gas gas pipelines, effective regulation of polluting industries in Appalachia is critical.

Appalachian Voices is joining with clean energy advocates, climate activists and public health proponents across the country in urging the Senate to stand for our health and environment and reject these nominees. 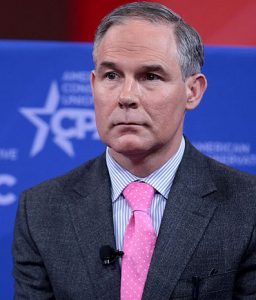 
During his stint for the past seven years as Oklahoma’s Attorney General, Pruitt has sued the EPA no less than 14 times. His goal seems to have been sinking as many federal programs as he could — ozone limits, toxic mercury controls, clean water protections, scenic protections for national parks, to name a few. The favorite target of the staunch climate-denier is anything to do with reducing greenhouse gases.

The Sierra Club has called him the “worst of the worst” of Trump’s pick for energy and environmentally related posts.

Pruitt’s aggressive agenda is driven in large measure by hefty campaign contributions and an entanglement of PACs, super PACs, trade and professional associations and other financial influencing from fossil fuel players — familiar names to our readers, like Koch Industries and Murray Energy. As he heads to the Senate Committee on Environment and Public Works for his hearing on Wednesday, Senate Democrats and others are pressing various ethics officials to opine on his ability to head the agency.

So egregious have Pruitt’s actions been in the past that the head of Oklahoma’s environment agency retired in frustration under his leadership, and the for the first time in its 50-year history, Environmental Defense Fund is opposing the nomination. Said William K. Reilly, a Republican who headed the EPA, in an interview with Yale Environment 360: “For a prospective EPA administrator to doubt or even contest a conclusion that 11 national academies of science have embraced is willful political obstruction. Science is the secular religion underlying everything EPA does, and one who cannot rely on it, or is determinedly contemptuous of it, cannot effectively lead the agency or serve as the country’s environmental conscience, which is EPA’s unique mission.”

Clean energy advocates, climate activists and others around the country are urging senators to reject Pruitt. NextGen is airing a TV spot in D.C. and seven states, including Virginia and Tennessee. 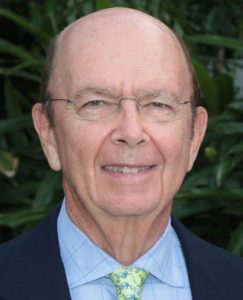 
Billionaire investor Wilbur Ross has a history of disregarding protections for workers, communities and the environment in Central Appalachia. During his tenure as president of International Coal Group from 2004 until 2011, Appalachian Voices caught ICG falsifying federally required water pollution reports. In 2010, we identified more than 10,000 violations of the Clean Water Act committed by ICG between 2008 and 2009, and in 2011 we found an additional 4,000 violations that occurred in the first three months of 2011. Read more about the legal case.

False reporting was not the only water pollution issue at ICG mines. In 2011, the Sierra Club, Ohio Valley Environmental Coalition and West Virginia Highlands Conservancy sued ICG for excessive discharges of selenium, a pollutant toxic to aquatic life. The discharges were ongoing for years prior to the 2011 suit, including while Ross was leading the company.

And in 2006, still under Ross’s tenure, an ICG mine was the site of one of the worst mining accidents in recent history — the Sago Mine disaster, which killed 12 miners. The U.S. Mine Safety and Health Administration determined that better safety practices could have prevented the disaster. 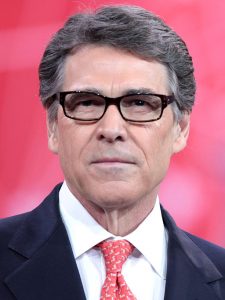 
Trump nominated former Texas governor, former presidential candidate and current climate denier Rick Perry to lead the Department of Energy — one of the three departments that Perry suggested eliminating in 2011.

Perry is a clear proponent of oil, gas and coal. Until December 31, 2016, he sat on the board of two major companies behind the Dakota Access Pipeline, Sunoco Logistics Partners and Energy Transfer Partners. He earned $270,000 through those board appointments in 2016 alone. Natural gas drilling increased in Texas under his leadership, and Perry defended offshore oil drilling after the 2010 Deepwater Horizon spill. Yet, Texas also saw a significant jump in wind energy during Perry’s term.

“If history is prologue, it’s gonna be a pay-to-play Energy Department and a bidder’s war between the coal companies, the renewable energy companies, and the big nuclear companies,” Tom Smith, executive director of the Texas Office of Public Citizen, told Utility Dive.

It’s unclear if Perry would continue to advance scientific research into clean energy. His 2010 book called climate change a “contrived, phony mess,” despite the fact that climate change is overwhelmingly accepted by the scientific community. As Secretary of Energy, Perry would also oversee the agency’s role in science education. In Texas, Perry advocated for presenting creationism in classrooms alongside the scientific theory of evolution.

Bill Richardson, former New Mexico governor and energy secretary under Bill Clinton, told the New York Times that Perry’s political influence could be helpful on the job. But he added a major caveat: “My concern is that Perry will get sucked in by the Trump climate deniers and try to dismantle the valuable renewable energy and climate change programs that the department manages.” 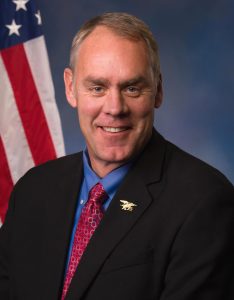 
A one-term Republican representative from Montana and former Navy SEAL, Ryan Zinke, is an avid hunter and fisherman.

In his one term in office, Zinke took anti-environment positions on issues including endangered species protection, oil drilling on public lands, smog standards, public input and protecting streams from mining waste, to name a few. Yet he broke that pattern to support full funding of the Land and Water Conservation Fund, which provides grants to local, state and federal governments to acquire and maintain land for recreation and conservation. 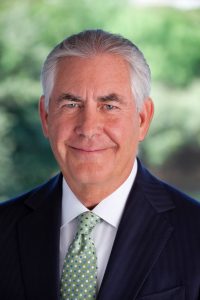 
A longtime Exxon employee, Tillerson became CEO of Exxon Mobil in 2006 and stepped down in December 2016 after being nominated for Secretary of State. Under his leadership, the global fossil fuel giant embarked on a $720 million joint venture with a Russian firm that includes drilling in the Arctic, shale extraction and a Siberian gas export plant. Those projects were halted in 2014 by U.S. sanctions on Russian oil and gas companies, and several oil and gas industry representatives have expressed optimism that if Tillerson becomes secretary, the United States would ease Russian sanctions and accelerate these oil and gas projects.

Under Tillerson, Exxon has come under fire for funding groups that publicly denied climate science even though Exxon’s own experts have documented evidence of climate change since the 1970s. But Tillerson’s record on climate change is more complicated. In 2009, as Exxon CEO, he announced the company’s support for a tax on carbon, though no such tax was currently proposed. Congress was considering a cap-and-trade bill at the time, which Exxon lobbied against — the bill passed the House but failed to reach a Senate vote. But while Tillerson acknowledges the reality of climate science, his behavior isn’t reassuring.

“Look at the actions, not the words,” reads a statement from the Sierra Club. “Rex Tillerson’s actions make it obvious that he will willingly sacrifice a healthy climate for the sake of oil and gas.”

During his confirmation hearing, Tillerson said that “the risk of climate change does exist, and that the consequences could be serious enough that action should be taken.” When asked if human activity is contributing to climate change, he hedged, saying that, “The increase in the greenhouse gas concentrations in the atmosphere are having an effect. Our ability to predict that effect is very limited.”

He also stated that climate change is not an “imminent national security threat,” which contradicts a 2015 Pentagon report that called it an “urgent and growing threat to our national security.”

Beyond these five cabinet nominees, a number of other Trump appointees are either feeble supporters of addressing climate change or are strident climate denialists. Read more from Climate Central.