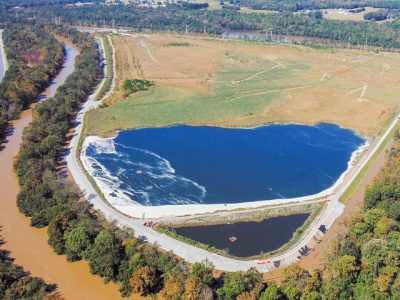 More than a million tons of coal ash at Duke Energy’s H.F. Lee plant along the Neuse River were submerged by flood waters after Hurricane Matthew. Photo on Flickr by Waterkeeper Alliance

Earlier this month, North Carolina was devastated by the impacts of Hurricane Matthew. Flooding occurred across much of the state, with the hardest impacts felt in the east.

Many of the communities hit the hardest, including lower income communities and communities of color, are those that are the least able to bounce back from such a catastrophic event. And much like they bear the brunt of industrial pollution, these communities are disproportionately suffering from the environmental impacts caused by flooding.

While the flood waters are still receding, we are learning about the impacts left in their wake. Flooding at Duke Energy’s H.F. Lee Plant, near Goldsboro, caused a breach in one of the plant’s cooling ponds. In a separate incident, one of the inactive coal ash basins was overrun, releasing an unknown amount of coal waste into the Neuse River.

It is critical to point out that the ash flowed out of an inactive pond. It underscores the notion that simply capping these sites and leaving them in place is not enough to keep detrimental impacts from occurring in the future. The only way to ensure these sites cause no future harm is to remove the ash from compromised locations, including flood prone areas and place it in either appropriate landfills, or even more promising, recycled into products for the concrete industry which wants and needs Duke Energy’s ash for its production facilities.

Hurricane Matthew reminds us that we are living in a time of less predictable weather patterns and more extreme storms With an eye to the future, we must continue to insist that leaving coal ash in unlined, vulnerable pits is not a solution the problem of pollution.

The North Carolina citizen group Alliance of Carolinians (ACT) Against Coal Ash released the following statement to express solidarity with those impacted by the floods and took a hopeful and determined stance to continue to fight not only against the threat of coal ash, but for all those for whom environmental justice has not been served.

The Alliance of Carolinians Together (ACT) Against Coal Ash stands together in support and solidarity with individuals, families, and communities across Eastern North Carolina devastated by the floods of Hurricane Matthew. The damage caused by this hurricane is compounded by contamination from coal ash, hog farms and other environmental hazards in their impacted communities.

Our alliance was formed and acts to protect and promote our health, the water we drink, the air that we breathe, and the land that sustains us. Hearing each other’s cries about coal ash and its threats to our communities, we’ve become a loud, unified voice for the rights of everyone to live in a healthy community. We are a family and there are times we need to lean on each other. Not all of us are impacted by this particular disaster, but, as in this case, the risk is exacerbated for us who live next to coal ash, whether now or in the future.

North Carolina’s people and elected officials cannot control a hurricane or other natural disaster, but if we heed the proactive pleas and concerns of our citizens, we can control the extent of the damage done. Much more needs to be done to secure coal ash, industrial hog waste and other threats to the health of our communities. Responsible and urgent action must be taken because natural disasters, and even more destructive ones, are happening with more frequency and intensity and will be sure to happen again. We are committed more than ever for permanent and safe solutions that protect all communities from all forms of environmental harm.