A Winged Predator Fights to Survive 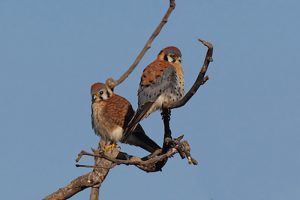 Nothing signals death to an unwary vole or grasshopper more suddenly than the piercing cry of a kestrel patrolling overhead. Sadly, that once-familiar call echoing over farms and fields is growing ever more silent.

The American kestrel is North America’s smallest falcon and a proud symbol of the country’s rural heritage. Like its cousin the peregrine falcon, kestrels are sleek, agile and incredibly powerful for their size. Compared to most hawks, falcons are speed demons — think of an F16 fighter jet versus a B52 bomber.

All native predators are critical in food chains, and the kestrel is no exception. Unfortunately, this handsome bird of prey is disappearing over much of its range, especially in the northeastern and mid-Atlantic states. Populations in the United States have declined by half since the late 1960s according to the North American Breeding Bird Survey, a massive data collection effort overseen by the U.S. Geological Survey.

Reasons for the decline are not fully understood, but culprits include monoculture farms, loss of open areas, competition from European starlings for nest sites and increased pesticide use. The neonicotinoid family of insecticides is especially harmful. Evidence continues to mount on the toxicity of these widespread chemicals to birds and other wildlife. Neonicotinoids also dramatically reduce the quantity and diversity of insects, and kestrels are voracious insect predators.

What You Can Do

• Build and install your own nest box if you have suitable habitat. Other birds that might use the box (and should be welcome) include bluebirds, tree swallows, flickers and screech owls. Starlings and squirrels — no!

• Hawk Mountain Sanctuary in Pennsylvania has excellent information on kestrel biology and building and erecting your own nest box. Visit tinyurl.com/hawkmtnkestrel

• The American Kestrel Partnership also has information on kestrels and nest boxes, including a video of a female kestrel fighting a starling that is trying to take over her box. Learn more at kestrel.peregrinefund.org

Only about the size of a blue jay, kestrels reign terror from above. They patrol over pastures and other open areas, or sit patiently on utility wires, ready to pounce on whatever small critter lands in their sights. Besides voles and grasshoppers, they also prey on mice, moles, shrews, lizards, frogs, snakes and — rarely — small birds.

Kestrels range over most of North America, with northern birds generally more migratory than their southern counterparts. They are primarily denizens of farmland and prefer open areas with short ground cover and scattered trees. Look for them on utility wires or exposed tree branches.

With most raptors it can be difficult to distinguish gender, but not so with kestrels. They are the most colorful of all raptors, with males spouting striking blue-gray wings and females a rich, tawny brown all over.

Cavity nesting is another relatively unique attribute of kestrels. Usually that means that they nest in old woodpecker holes, but kestrels will utilize a wide variety of opportunities, including holes in buildings and even the open ends of pipes on utility towers. Three to five eggs are laid and incubated for a month before hatching. The chicks then spend roughly another month in the nest before fledging.

Fortunately, kestrels take readily to artificial nest boxes, which presents an opportunity for the public to help. Most state wildlife agencies can provide helpful information on how and where to erect kestrel nest boxes. Local bird clubs can also be of assistance. The Kentucky Department of Fish and Wildlife Resources maintains a kestrel nest box project on public land.

In the winter of 2014-2015, the Virginia Society of Ornithology began a five-year project to build and install kestrel nest boxes throughout the state. Project volunteers — nicknamed the Kestrel Strike Force — seek out suitable sites, knock on doors to get permission, then erect a box at no charge to the landowner. 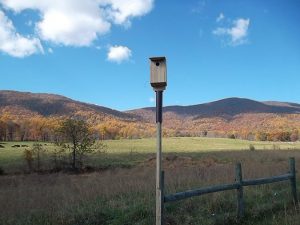 The volunteer Kestrel Strike Force provides nest boxes for the falcons in Virginia. Photo courtesy of Virginia Society of Ornithology

Boxes are placed on trees, sides of outbuildings, or, preferably, extended on treated two-by-fours and attached to fence posts. Most are raised about 12 feet above ground and oriented in an east to southeast direction. There is no maintenance involved for the landowner, but they are requested to report any activity in and around the box to the Strike Force, which maintains ongoing records. The project is funded through donations, and all aspects of the endeavor are carried out by volunteers.

To date more than 240 boxes have been erected in 30 Virginia counties. While installing boxes, the Strike Force endures mud, barbed wire, ticks, chiggers and livestock of questionable temperament, but it carries on!

A frequent question asked by those unfamiliar with kestrels is “will they eat my chickens, my cat or my poodle?” Once those fears are allayed, most folks are happy to host a box and take pride in knowing they are helping this fascinating little falcon continue to grace the countryside.

Dan Bieker is an assistant professor of Natural Sciences at Piedmont Virginia Community College in Charlottesville, Va., and board member of the Virginia Society of Ornithology.