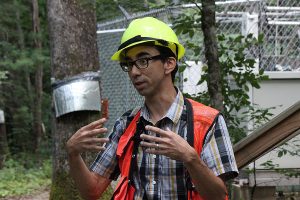 Chris Oishi discusses his research in “The Electric Forest” at the Coweeta Hydrologic Laboratory. Photo by Karl Bates

Ancient air bubbles trapped in ice provide a history of the atmosphere from as far back as 400,000 years ago, and tell the story of a new geologic time emerging. The earth’s atmosphere now contains more carbon dioxide than it ever did in these ancient samples, according to NASA, namely because of the potent greenhouse gases released from burning fossil fuels.

This past April, 180 countries signed the Paris climate agreement, which lays out a strategy to keep global temperatures from rising more than two degrees Celsius above the pre-industrial average. In 2015, the Obama Administration released the Clean Power Plan, an unprecedented effort to curb carbon dioxide emissions from power plants in the United States. As of July, global temperatures are 1.03 degrees Celsius above the historic baseline, according to the National Oceanic and Atmospheric Administration National Centers for Environmental Information.

Warming temperatures, driven by changes in global atmospheric circulation, are breaking records in the Southeastern U.S. The most recent decade — 2001 to 2010 — was the warmest on record, and in the past three decades the Southeast has experienced more extreme climate and weather disasters than any other region of the United States, according to a Southeast Regional Climate Assessment report. But when it comes to predicting the impacts of global climate change in Appalachia, Virginia State Climatologist Jerry Stenger laughs at the mystery presented by the complex terrain.

The mountains’ unique weather patterns make it challenging to predict how global scale warming will affect the region. According to Stenger, while much of Appalachia will see warming, some areas will see cooling or no change at all. “There’s so many uncertainties, but that’s the nature of it,” he says. 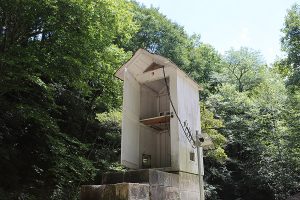 Appalachia’s biodiverse ecosystems harbor species that thrive in its lush, wet forests and provide the region with ecological resilience, a term that refers to a system’s ability to absorb impacts before changing state altogether. But warming is resulting in longer growing seasons and is leading some plants to climb in elevation or move northward. Some rare and important species are at risk from a more unpredictable climate, such as the spruce-fir forests on the tallest mountain peaks, the region’s uncommonly abundant species of salamanders or the prized brook trout.

Even in southern Appalachia, which boasts a rainforest reputation, the U.S. Drought Monitor shows precipitation was below average across most of the region this year. All over the Southeast, droughts are becoming more common and severe, impacting municipal drinking water supplies, many of which are reservoirs fed by watersheds flowing from private or federally owned forest.

At the Coweeta Hydrologic Laboratory in southwestern North Carolina — a nearly 5,000-acre forest designated for experimental research in 1934 — U.S. Forest Service scientists track stream flow within a watershed to better understand how forest changes affect reservoirs. They also monitor climate and forest changes at places like the so-called “Electric Forest,” a section where trees are rigged with monitoring devices to assess their water uptake. Advanced meteorological tools measure the amount of carbon dioxide cycling through the trees and the atmosphere.

In his research at Coweeta, Chris Oishi has found that southern Appalachian forests absorb more carbon dioxide from the atmosphere than originally thought. He discovered that the Electric Forest takes carbon dioxide from the atmosphere and stores it in the soil and plant material, ultimately absorbing more carbon than it generates through decomposing trees or disturbed soil — resulting in what is known as a carbon sink. At Coweeta, about 1.1 tons of carbon are sequestered per acre of forest per year, roughly as much carbon dioxide as the emissions of one average car.

Oishi and his colleagues have also found that climate change is lessening the carbon sink potential of forests as warmer, drier years lessen the trees’ ability to absorb carbon. Species transition within an ecosystem also plays a factor. In one example Oishi noted, as the carbon-absorbing hemlock dies out across Appalachia and is replaced by rhododendron, carbon sinks are diminished.

Forested land would need to increase in size in the Southeast in order to keep up with rising carbon dioxide emissions, says Oishi.

One group working to maintain the Southeast’s forest carbon sinks is the Dogwood Alliance, a conservation advocacy group based in Asheville, N.C. The organization’s Carbon Canopy program is working to create a market for the region’s carbon sinks, providing private landowners and corporate partners with financial incentives to help preserve large tracts of forested land. 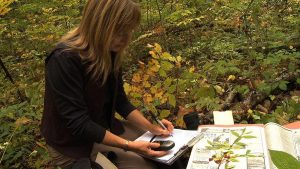 Climate change has the potential to increase a forest’s vulnerability to drought. According to Oishi, the dominant species in southern Appalachian forests is shifting from oak and hickory to tulip poplar and maple, most likely due to fire suppression and climate change. These types of trees use more water, lessening streamflow and water supply. Since record keeping began in 1936 at Coweeta, 80 percent of the severe drought cycles have occurred between 1980 and the present.

During a drought, the forest system becomes stressed when trees and plants compete for water. Higher-elevation hardwood coves host valuable medicinal plants that are especially vulnerable to water scarcity. Some species can be killed off in as little as one season, as opposed to trees, which take several years to die from drought.

Joe-Ann McCoy, director of the North Carolina Arboretum’s Germplasm Repository in Asheville, N.C., works to save the seeds of these important plants, such as black cohosh and ginseng. The seed bank at the arboretum is one of the only ones in the country focusing on native medicinal plants. McCoy is looking for varieties resistent to climate change and focusing on projects with people who have long-standing relationships with these plants.

According to McCoy, seed banks are vitally important for helping people adapt to climate change. For the past seven years, McCoy has been partnering with the Eastern Band of Cherokee Indians on seed saving. Like all tribes in the Southeast, the Cherokee do not have any seed banks. But McCoy is hoping to change this. In collaboration with the United South and Eastern Tribes, Inc., and the Bureau of Indian Affairs, she is helping to establish a program to create seed banks of traditional native and heirloom plants for 26 indigenous tribes.

“We should have already done this 10 years ago,” McCoy says. “Europe is way ahead of us on this.”

As social justice and environmental issues more visibly intersect, a solutions-based effort is emerging — climate justice. People who are vulnerable to social and economic challenges are also susceptible to being directly impacted by climate change, such as having fewer resources to rebuild after severe weather events. People in low-income communities are more likely to be impacted by the fossil fuels that cause climate change — such as people who live near power plants. Climate justice aims to address all of these issues at once.

Stan Johnson, co-founder of Socially Equal Energy Efficient Development in Knoxville, Tenn., teaches city residents about shifts they can make to lessen their impact on the climate while also empowering youth from the city’s low-income neighborhoods. 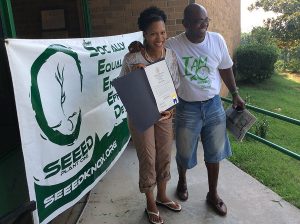 A SEEED participant is congratulated on completion of a program. Photo courtesy of SEEED.

According to Johnson, the organization’s expertise is reaching people in the community who are not reached by traditional media pathways. “We don’t want it to be just the eco-elite with the solar panels and hybrid cars,” he says. “Bring it down to the everyday person — what they can do.”

West Virginia’s economy is built on fossil fuels including coal, says Rodd, and talking about climate change can be very difficult for people who have mined and extracted these resources for generations. “Nobody told them they were at risk of losing their jobs because of the tiny molecule CO2 that has the potential of destroying the planet,” he says.

Part of the solution, he says, is to financially support these communities and fight for a more just transition away from a fossil-fuel dependent economy. He speaks in broad terms about what is at stake: the loss of fish habitats and forests, and increased flooding and more frequent heat waves. He has had the most success with teachers and students, the least success with politicians. In West Virginia, he says, “it’s an adjustment process for everybody.” 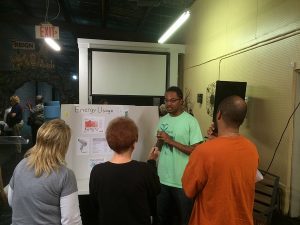 During canvassing, SEEED invites the community to an energy efficiency workshop. Photo courtesy of SEEED

Allegheny Highlands is now focusing primarily on climate change education for teachers. Rodd’s generation helped create the problem, he says, but it will be up to the next generation to fix it.

To avert climate chaos, Jodi Lasseter, founder and co-convener of the North Carolina Climate Justice Summit, encourages a culture shift achieved by developing authentic relationships across differences, such as race, age and gender. The summit, in its third year, unites high school students, community organizers and nonprofit changemakers from across the state. The groups learn from and inspire each other to “reform, resist, reimagine and re-create the societal systems that constructed fossil fuel-induced climate change,” says Lasseter.

The event, held in Browns Summit, N.C., gives attention to those who are directly impacted by fossil fuels. Last year, a member of Walnut Cove, N.C., which is polluted by coal ash, participated in a frontline community panel.

With the increasing threat of climate change, ecological resilience is important for Appalachia’s biologically sensitive areas. The ability of the region to develop solutions relies on the strength of its scientific and grassroots communities. According to Lasseter, it’s critical that those who are not on the front lines of climate impact stand in solidarity.

“We want to reclaim our people power to take collective action,” she says.

North Carolina: This year saw the sunset of a state tax credit for renewable energy, and state regulators rejected a petition that would have increased access to solar power by allowing companies other than Duke Energy to finance solar panel installations.

Virginia: Although the legislature blocked the Clean Power Plan’s implementation in the state, the governor issued an executive order for state agencies to develop carbon reduction strategies by spring 2017.

West Virginia: The legislature defeated an effort to repeal the state’s adoption of national science education standards that include climate change, but adopted curriculum changes that downplay the link between climate change and human causes.

Tennessee: Under a new law, farmers now have greater protection to open Confined Animal Feeding Operations, or CAFOs, even if they are deemed a public or private nuisance. These massive livestock operations are significant sources of methane, a potent greenhouse gas.