Less Twittering in the Trees 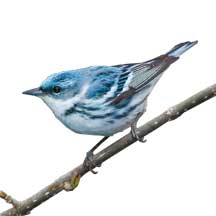 The cerulean warbler’s estimated 70 percent population decline over the past 40 years was alarming enough for conservationists to petition the U.S. Fish and Wildlife Service to list the bird as threatened under the Endangered Species Act. The agency announced its decision not to list the bird, but encouraged the submission of additional data on the status of and threats to the species.

Spring comes slowly to the mountains. Long after the early-season flowers have come and gone in the lowlands, winter-weary mountain dwellers wait patiently for their first sight of a royal purple crocus, the golden glory of the backyard forsythia and the return of our cherished birds.

But the birds of Appalachia are not as plentiful as they once were, with population declines among some species causing concern among conservationists and sparking the development of unprecedented partnerships to try to mitigate some of the impacts leading to these population decreases.

Impact of Forest Fragmentation
Birds can be notoriously picky about their surroundings. One such bird is the cerulean warbler, a small, azure bird that nests high in the canopy of old-growth-type forests. Ceruleans like sweeping tracts of mature forest with tall, large-diameter trees and a structurally diverse canopy with multiple vegetation layers.

The bird breeds in eastern North America and winters in the Andes Mountains in South America. Both its summer and winter locations overlap with major industries that impact the bird’s habitat, according to Dr. Brian Smith, American Bird Conservancy’s Appalachian Mountains Joint Venture (AMJV) coordinator.

In North America, the major industry is coal mining, although agriculture and urbanization have also resulted in significant forest fragmentation, Smith explained. Eighty percent of cerulean warblers breed in the AMJV area, with the highest density in the coalfields, Smith said. Ceruleans don’t like—and avoid—the abrupt edges between forest and open grassland that are common byproducts of abandoned coal-mining operations.

In South America, agriculture has encroached on the birds’ winter habitat. According to the Cerulean Warbler Technical Group, an estimated 60 percent of the winter habitat for cerulean warblers might already have been lost to agricultural activities.

Because of their size, their penchant for staying off the beaten path and their practice of nesting up high, cerulean warblers are difficult to monitor, but based on North American Breeding Bird Survey data, the species has steadily declined approximately three percent annually over the past 40 years.

But mature forest habitat birds aren’t the only ones on a watch list. A whopping 107 birds are identified as priority birds of conservation concern in the Appalachian Mountains Bird Conservation Region, with well-known species such as the purple martin, red-headed woodpecker, whip-poor-will and chimney swift making the list, along with many others.

Although it is one of the most common species in eastern forests, the wood thrush has shown steady, long-term declines with an estimated 43 percent population reduction since 1966.

While it will be decades before the Ohio trees are mature enough to attract ceruleans for nesting, Smith said, the trees’ gradual growth will progressively reduce the hard edge between forest and grassland, creating a buffer that will benefit the birds. In the meantime, other species that like early successional forest conditions can thrive.

In addition, two federal developments in March 2009 hold promise for increased attention to bird habitat—one from EPA, the other from the Department of the Interior.

With regard to two proposed surface coal mining operations, the EPA notified the Army Corps of Engineers of its “significant concern” about and the need to address “the cumulative impacts on the watershed, forest and habitat destruction and fragmentation within a globally significant and biologically diverse forest system, and the impairment of downstream water quality.” The EPA signaled its intent to review other coal mining permit applications as well.

Secretary of the Interior Ken Salazar released the first-ever The State of the Birds report that “reveals troubling declines of bird populations during the past 40 years—a warning signal of the failing health of our ecosystems.”

Smith said the American Bird Conservancy is encouraged that the current administration is taking a step back to conduct a scientific review of the overall ecological impact of coal operations, and he expects The State of the Birds Report to have a significant and positive effect on conservation efforts.

“We have a steep hill ahead of us,” Smith said, “but the track record has shown that if we synthesize our approach and methods, we can be successful.”

Priority Birds of Conservation Concern in the Appalachian Region

The following list identifies priority birds of conservation concern in the Appalachian Mountains Bird Conservation Region, categorized into highest, high and moderate priority tiers to help guide decisions on management, funding and conservation actions. Twenty additional species on the AMJV priority species list have not yet been assigned to a tier.

Appalachian bird watchers will find many of their favorite species on this list.