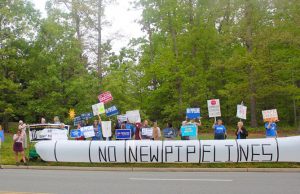 The controversial $3.2 billion pipeline, proposed by EQT and NextEra, would cut 301 miles through West Virginia and Virginia — crossing public lands and more than 1,000 waterways and wetlands — and require the construction of three large compressor stations. The Mountain Valley Pipeline is one of six major pipelines proposed for the same region of Virginia and West Virginia where experts warn the gas industry is overbuilding pipeline infrastructure.

>> See below for a bulleted list of major impacts as defined by FERC.

In preparing its draft Environmental Impact Statement, the Federal Energy Regulatory Commission (FERC) relied heavily on gas company data to assess the public need for the project, the groups say. A report released earlier this month concludes there is enough existing gas supply in Virginia and the Carolinas to meet demand through 2030. The groups also fault the agency for dismissing clean energy alternatives.

In response to requests from numerous elected officials and organizations, FERC has extended the usual 45-day period for public comment to 90 days. Comments are due December 22.

While legal and environmental experts are continuing to review the nearly 2,600-page document, they have identified major gaps in FERC’s analysis, including:

“It’s shameful that FERC did not prepare a programmatic Environmental Impact Statement,” said Joe Lovett, Executive Director of Appalachian Mountain Advocates. “It would allow a private pipeline company to take private property for private profit. Apparently FERC decided it didn’t have to do the hard work necessary to determine whether the MVP is necessary. Such a lack of diligence is remarkable because FERC has the extraordinary power to grant MVP the right to take property that has, in many cases, been in the same families for generations.”

“The resource reports MVP has already submitted to FERC are the alleged backbone upon which the DEIS is created. These reports are, however, uncatalogued collections of partial surveys, studies and desktop engineering notions which are rife with omissions, and inadequate and incorrect data”, said Laurie Ardison, Co-Chair of Protect Our Water, Heritage, Rights (POWHR). “The DEIS is fatally flawed for a variety of process and substance matters, not the least of which is MVP’s insufficient, unsubstantiated foundational material.”

“FERC once again has its blinders on to the full climate consequences of fracked gas,” said Anne Havemann, General Counsel at the Chesapeake Climate Action Network. “FERC’s limited review ignores the full lifecycle of pollution the pipeline will trigger by acting as if gas comes from nowhere. FERC also provides no clear explanation of exactly how it arrived at its limited estimate of emissions. If FERC did a full accounting of the climate harm of this fracked-gas project and clean energy alternatives, it would have no choice but to reject it.”

“Recent studies have shown that our region has the necessary energy to meet demand through 2030 already. We know that clean, renewable energy is available and affordable, and by this time, it will be the only choice to preserve our environment and climate. Additional fossil fuel projects like the Mountain Valley project, are not needed to keep the lights on, homes and businesses heated, and industrial facilities in production — despite the claims by MVP developers,” said Kirk Bowers, Pipelines Campaign Manager with the Virginia Chapter of Sierra Club.

“This would be the first fracked-gas pipeline of this size to cross the Alleghany and Blue Ridge mountains. Running a massive gas project through the steep, rugged terrain laced with dozens of rivers and headwater streams is a perfect storm for major damage to our water resources,” said Lara Mack, Virginia Campaign Field Organizer with Appalachian Voices. ”FERC also fails to meaningfully address the safety issues and other concerns so earnestly voiced by hundreds of homeowners and landowners along the route.”

“The Mountain Valley Pipeline could result in taking people’s property in West Virginia solely to benefit out-of-state companies,” said Jim Kotcon, West Virginia Sierra Club Chapter Chair. “To make matters worse, it will affect all West Virginians because it will result in higher gas prices for local consumers. Low cost energy is one of the few advantages that West Virginia has in attracting new businesses, and this pipeline will make our energy costs higher while lowering costs for competitors in other states. That pipeline is bad business for West Virginia businesses.”

Highlights of major impacts of the MVP route as identified by FERC in the DEIS: