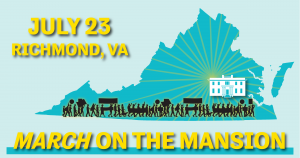 RICHMOND, Va. – An unprecedented alliance of groups and leaders released an open letter to Virginia Governor Terry McAuliffe today challenging him to stop supporting fossil fuel projects that worsen climate change and harm communities. The letter calls on the Governor to instead join the fight for “energy justice, democratic renewal, and healthy communities” in Virginia.

More than 60 groups and leaders from mountain counties to coastal communities to the DC suburbs signed the letter, which sets July 23 as the date for a mass rally at the Governor’s mansion to demand a just transition to clean energy now.

The alliance outlines how Governor McAuliffe, after running on a platform of clean energy, has yet to act with the urgency the climate crisis demands or protect communities on the front lines of fossil fuel pollution threats. McAuliffe’s support for offshore oil drilling, for example, threatened to expose the state’s coast to an oil spill on the scale of the BP disaster. The Governor’s support for major fracked-gas pipelines would destroy farms, drinking water, and property rights while triggering nearly twice as much greenhouse gas pollution as all of Virginia’s current power plants combined.

“On the biggest, most polluting issues of our time, the Governor simply has not shown he has heard the voices of affected communities or joined the growing statewide call for justice,” the letter states. “For too long, the powerful few have made energy decisions that adversely affect the vulnerable many. Now the historic moment is before us – and the duty is ours – to change that forever.”

Speakers released the letter, as well as a website to promote the “March on the Mansion” rally on July 23 in Richmond during a tele-press conference on Wednesday.

Signers range from faith groups like Virginia Interfaith Power and Light to regional coalitions like the Blue Ridge Environmental Defense League, Allegheny-Blue Ridge Alliance, and Protect Our Water, Heritage, Rights (POWHR) to environmental and justice groups like Appalachian Voices and Virginia Organizing to clean water groups like the Potomac Riverkeeper Network and New River Conservancy to Mothers Out Front in Hampton Roads and the Virginia Student Environmental Coalition.

The groups lay out their own vision for energy policy in Virginia that would match the scale of the climate crisis, give local communities a voice, and advance social and environmental justice, calling for “a state where energy development means prosperity and health for everyone, without pain and harm for sacrificed regions, without property rights denied and whole regions left behind.”

“If our voices have gone unheard from our separate regions of the state, we have a duty to bring those voices together until we are heard,” the groups state. “If the governor has difficulty hearing our specific concerns and our even more specific proposed solutions, we will help him hear them by bringing our voices directly to him.”

The letter outlines a series of steps Governor McAuliffe can take – wholly within his authority and not dependent on Congress or the Virginia General Assembly – to lead Virginia unequivocally toward a clean energy future.

These solutions include using state authority to challenge water permits for proposed fracked-gas pipelines under the Clean Water Act, dropping support for offshore drilling, and intervening to protect communities from reckless coal-ash disposal plans. They also include committing to regulations under the federal Clean Power Plan that would put a strong cap on total, aggregate greenhouse gas pollution from Virginia power plants now and into the future.

RESOURCES:
Letter released today to Governor McAuliffe
Details on the July 23rd March on the Mansion rally in Richmond.
###