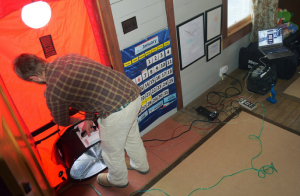 John Kidda, a Boone-area home energy contractor, donated an extensive energy audit on the a local home as part of the “High Country Home Energy Contest.”

The first report details the energy savings achieved after one year for the three winners of the “High Country Home Energy Makeover Contest” launched in late 2014 by Appalachian Voices. A total of $5,300 was spent on insulation, air sealing and other improvements for the three families, which are served by the Blue Ridge Electric Membership Corp.

“We are so thankful for all of the work that was done on our house. We immediately began noticing an improvement in the comfort of our home and saved quite a bit on our heating costs last winter,” Sean Dunlap says.

The three families won the improvements in the contest and do not have to pay back the costs, but for a utility-financed program, the energy savings from the upgrades on the three homes would pay off the cost, on average, in 13 years, and the savings would continue after that. “Based on the results from these homes, it is clear that a modest investment in insulating, air sealing and fixing air ducts can save significant amounts of energy and provide a decent return on investment,” says Daniel Kauffman, President of ResiSpeak, which produced the report.

Appalachian Voices conducted the contest in part as a way to raise awareness of the opportunity for rural electric cooperatives to help pay the upfront costs for their members to invest in energy efficiency and enable them to pay off the cost on their monthly bills over time, a financing tool called “on-bill financing.” In April, Blue Ridge EMC announced its pilot Energy SAVER Loan Program, which is providing $100,000 in loans to as many as 30 homeowners to pay for weatherization, insulation and heating system improvements.

Appalachian Voices’ Energy Policy Director Rory McIlmoil hopes to see the pilot expand to a permanent, larger-scale program and says other co-ops in the region could offer comprehensive energy efficiency financing as well.

“In the region served by Blue Ridge, Surry-Yadkin and French Broad electric cooperatives, there are 24,000 families living in poverty and 72,000 homes that are more than 30 years old,” says McIlmoil. “These numbers suggest that what’s needed to fully tackle the problem of high energy costs is millions of dollars a year that is made available to help residents of all income levels afford energy efficiency improvements. That level of investment would also provide a significant boost to local economies.”

Also released today are the results of a regional Facebook survey conducted for Appalachian Voices by Resource Media that further illustrate the need for accessible financing for home energy improvements. Of the 300 survey respondents, which include customers of four western North Carolina co-ops and of Duke Energy, 89% said they have trouble paying their energy bills sometimes, often or always. Additionally, 69% said being able to afford the upfront cost of improvements was one of the biggest challenges, and 40% said they would apply for on-bill financing from their electric utility if such a program were offered.

“We know that there are still many unmet needs when it comes to achieving the region’s energy efficiency potential,” says Amber Moodie-Dyer, North Carolina Energy Savings Outreach Coordinator at Appalachian Voices. “We continue to partner with the community and electric co-ops to expand access to energy upgrades that improve home comfort, help residents save money, provide local jobs and business opportunities, and help protect our water, air and other natural resources.”