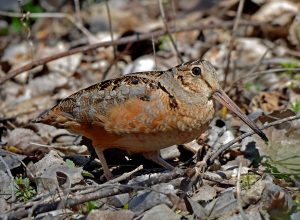 The American woodcock lives across eastern North America. It can be recognized by its long beak and distinctive call, but its camouflaged coloring makes it hard to find. Photo by Rodney Campbell

Characterized by a long bill, short and stout stature, extravagant mating display and a nickname like timberdoodle, the American woodcock would seem to be a bird that stands out. But that is not the case.

Well-camouflaged and motionless until up close, the American woodcock is actually very hard to find. Capturing the birds for research requires a good eye for potential woodcock habitat, as they rest in dense forest during the day to avoid predation and roost, feed and perform courtship displays in open fields at night, says Joe Moore, a graduate student at the University of Arkansas. Moore works with wildlife agencies and other organizations to track the birds and learn more about their migration habits.

“You can walk within a foot of a woodcock and they’re not going to move,” says Jesse Pope, executive director of Grandfather Mountain Stewardship Foundation in Avery County, N.C. “They’re just sitting there, really still, that’s their mechanism of survival. They’ll let a predator get within really close proximity before they fly.”

Pope has spotted the woodcock occasionally throughout the winter in western North Carolina. In Appalachia, hens begin nesting in March, and lay eggs that hatch several weeks later, according to Pope.

This region also provides a stopover habitat for the species, which is a place for birds to rest and “refuel” during long migrations, according to Moore.

Many migration details are unknown due to the difficulty of locating individual birds multiple times throughout the annual cycle, but recent advancements in satellite transmitters now allow remote tracking of woodcock and allow researchers such as Moore to follow movements of individual birds and begin to unravel some of the mysteries of the migratory patterns of this cryptic bird.

American woodcocks require two very specific habitats. During the day, woodcocks raise their young, avoid predators and find an abundance of earthworms to eat in thickets with wet grounds. In the evening, woodcocks move to open clearcuts, farmland or pastures.

“It’s kind of interesting that a lot of the conservation for woodcocks involves clear-cutting, which is normally not what you think of when you think conservation project,” Moore says.

Range-wide population surveys since the 1960s have shown that the American woodcock population is gradually declining at a rate of about 1 percent every year, according to the U.S. Fish and Wildlife Service.

This decline over several decades is primarily due to the overall loss of forested area due to urbanization in eastern North America and the conversion of early successional forests to mature forests, according to Moore.

These mating rituals, which take place at either dusk or dawn in winter or early spring, begin with a repetitive buzzing call by the male woodcock, called a peent. The male bird then hovers and flies in a circle 100 to 300 feet above the ground. Following its descent, the woodcock continues its mating song. Each of these processes lasts about four or five minutes, but can be repeated for over half an hour.

The woodcock may sing and dance in the fields, but the forests that they depend on for food are one of the most endangered habitat types in the Southern Appalachians, according to Pope.

“They’re one of those species that are tied to a really fragile and rare habitat,” Pope says.