Just not in support of the Atlantic Coast Pipeline 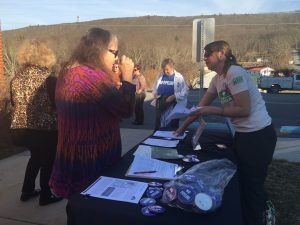 At recent meetings on the Atlantic Coast Pipeline, advocacy groups offered residents the opportunity to contact regulators and call for additional scoping meetings along the new route of the proposed natural gas pipeline.

A pattern emerged during the recent trio of open house meetings hosted by Dominion in Churchville, Hot Springs and Snowshoe. Unfortunately, it was a pattern of misleading materials, unhelpful spokespeople and dubious facts.

At least the meetings gave residents a chance to assemble and challenge Dominion’s side of the Atlantic Coast Pipeline story. Particularly at the session in Hot Springs, citizens expressed appreciation for non-profit groups like Appalachian Voices, Friends of Nelson and Wild Virginia that set up tables outside to provide resources and support people resisting the proposed natural gas pipeline.

Now 590-miles long, the latest proposed route for the Atlantic Coast Pipeline impacts new areas of Pocahontas County, W.Va., and Bath, Highland and Augusta counties in Virginia. As a result of the recent route change, many citizens are now implicated as impacted property owners.

At NO PIPELINE tables outside these events, advocacy groups offered residents the opportunity to contact the Federal Energy Regulatory Commission (FERC) which oversees interstate pipeline approval. Petitions were available for residents to ask FERC to host additional scoping meetings along the proposed re-alignment of the proposed Atlantic Coast Pipeline and conduct comprehensive environmental review of all the proposed gas transmission pipelines on our region. 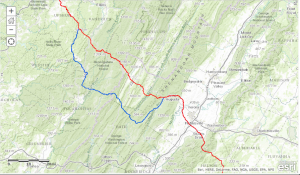 The proposed realignment (in blue) of the Atlantic Coast Pipeline impacts new areas of Pocahontas County, W.Va., and Bath, Highland and Augusta counties in Virginia. Click to enlarge.

Meanwhile, Dominion set up exhibits inside the meetings where dozens of company representatives conveyed their versions of the facts to attendees.. One example of such a conversation was an exchange between a resident and a Dominion engineer over a curious bit of mathematical wizardry: whether a 42-inch pipeline is only twice the size of a 21-inch pipeline, which sparked a vigorous debate as to the area, volume and flow, and which exemplifies the rhetorical and even scientific sleight of hand citizens now expect from Dominion.

Comparing notes afterward, people discovered that the information communicated to them lacked consistency depending on the Atlantic Coast Pipeline representative with whom they spoke.

Local organizing in opposition to the Atlantic Coast Pipeline is picking up. For impacted landowners with homes on the modified route, there was a new high resolution map put together by the Cowpasture River Preservation Association showing wetlands, forests, documented karst areas and private property, which just goes to confirm that local community groups are likely the most qualified entities to aid residents seeking answers.

If you are a landowner impacted by the Atlantic Coast Pipeline’s original proposed route or a route change, or if you’re just a concerned citizen and want to protest the proposal, here’s how to officially intervene in the FERC regulatory process. We’ll stay in touch with updates!