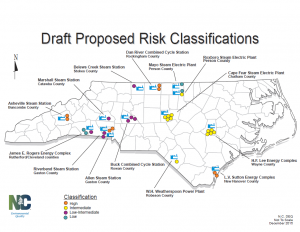 Earlier today, the North Carolina Department of Environmental Quality (DEQ) released its Draft Proposed Impoundment Classification that, when finalized, will determine the closure timelines coal ash sites across the state. Below is a response from Appalachian Voices’ Amy Adams to the DEQ report, which includes significantly weaker recommendations than those in an earlier draft leaked in December.

It is alarming that DEQ leadership altered more than half of the classifications recommended by DEQ’s expert staff in the agency’s own draft report, leaving North Carolinians with the dramatically weakened proposal announced today. This is especially egregious considering that more than 300 homes near Duke Energy’s Allen, Buck, and Belews Creek plants have received “do not drink” orders from the health department and must rely on bottled water. DEQ owes these residents an immediate and clear explanation for the extreme, last-minute changes to the classifications of these coal ash pits.

Duke’s neighbors believe firmly that the coal ash impoundments near their homes are high-risk. There is some hope that during the public hearing process DEQ officials will listen to North Carolinians and use the available science to revert the classifications back to high-risk, as that is what Duke’s neighbors and residents across the state demand and need.