Special to the Front Porch: Welcome to our occasional feature where we invite a guest to “pull up a chair” and share their views on issues important to you. Our guest today is Jill Averitt, who, together with her husband, sisters and in-laws, is raising seven kids, lots of chickens, and vegetables on 130 acres in Nelson County, Va. Jill created the “Prayers Not Pipelines” project to express her concerns about a massive fracked-gas pipeline that is proposed to cut right through her family’s land. 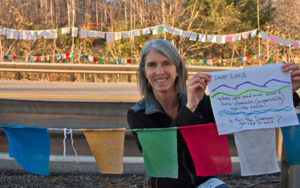 When the Atlantic Coast Pipeline was first announced, it took us a few months to understand the reality of the proposal. The original route was going through our friends’ property on Shannon Farm and it seemed unreal. We decided to get involved because we could feel their anxiety and wanted to help.

Soon after, the pipeline route was moved. A victory! We thought. Until Dominion announced the new proposed route was going through our property, which we share with my in-laws, my two sisters and their families. And not just our home, but right through the middle of the land where we had begun building our dream project – a nature-oriented resort.

The pipeline would clear our forests and put our lives in jeopardy if there was an explosion. We have seven children between us and four homes on 130 acres where we have spent the last ten years raising our kids. No amount of money can replace that.

We really got into the fight at this point. There are many nights of anger, fear and frustration from being bullied by Dominion. It has more money, it seems to be heard more quickly and have a special immunity to accountability. My husband, Richard, has worked tirelessly, reaching out to our senators, congressmen, Board of Supervisors, and governor’s representatives, not to mention the endless meetings with advocacy groups and lawyers trying to find angles to fight this behemoth.

I have been sad and physically sick a lot of nights after talking all day about our fight. I wanted to do something positive and uplifting for my family and community who have been spending any little time they have in their busy lives experiencing the same emotions.

So I came up with the idea of the prayer project that was later named Prayers Not Pipelines. This is what I sent to a few friends:

“I’m thinking of creating an art piece on both sides of Route 151 where the pipeline would intersect the road. Imagine a ‘wall’ of white gauzy fabric on both sides of 151 that you can see through to the trees, but blocked enough to imagine their loss. It would be 125-feet long, the width of the path of the proposed pipeline.

“In front of that white wall we would stand hand in hand with our ‘No Pipeline’ shirts. We would line both sides of 151. As we filter in and out to take turns, we could set up a station at the Rockfish Valley Foundation Natural History Center to hand out information flyers. While the community is waiting their turn to stand, we would have a table for folks to create their own prayer flag. We would have white squares of cloth with markers and people can make their own statement, intention, artwork or prayer. We will collect them and pin them to a ribbon and hang them on the wall. One for each side.

“Our intention for this is to send out positive messages to the community and the forest. Blessings and protection, if you like. So what is left is not a bunch of ‘No Pipeline’ signs, but prayers going out to the world that this is a protected and sacred place.” 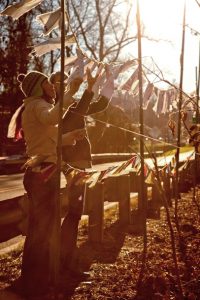 After sending this out, the project took on a mind of its own, and in 12 days our community hosted the Prayers Not Pipeline event. It was a fantastic event that was covered by four news stations, three newspapers and several websites. But mostly it did exactly what we intended it to do and it continues to reverberate those feelings every day. You can’t drive past the wall of flags without feeling that this energy is real and that the pipeline is not coming through this area.

After the event, we left the fabric wall up for two days. By the third day it started to rip and I took it down, leaving the prayer flags to blow in the wind and do their thing. I called the Virginia Department of Transportation to ask them to let me know when they wanted to take the flags down because I wanted to keep them. They said I could leave them up.

That lead me to the second half of this project, which is happening right now. 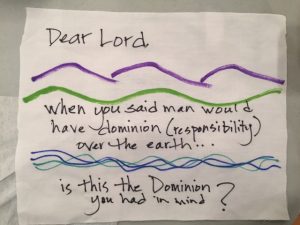 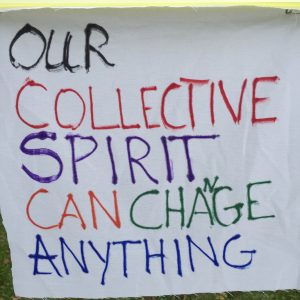 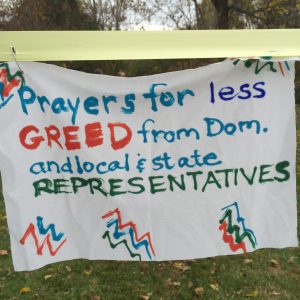 Each week I go to Trager Brothers Coffee at the Rockfish Valley Community Center in Nelson County to collect the flags that folks have made during the week and I add them to the others. As I approach, the flags flapping with each car that flies by, I can feel the power of the collective intentions. It’s strong and with every blast of wind, I can feel the expansive release of blessing rushing around me. It fills me with a sense of calm that is hard to come by for those of us working on this fight. I have come to realize that tending to the wall has allowed me to hold my intentions firm in times when I start to lose faith. I close my eyes, take a deep breath and feel that protection.

I will keep pinning up these flags and making sure they fly securely to remind us all not to lose faith or give up hope. This pipeline will not come through our county and I believe it will not be built at all. How that happens or what it looks like I do not know, I just have faith that our collective work will stop it. Our community in Nelson County is the most loving, caring, sharing community I have ever lived in. That has a lot of power.

So please stop by to participate in this amazing collection of blessings and add yours. I can see thousands of flags flying and yours is one of them. You can stop by the Natural History Center on Saturdays and Sundays from 10 to 4 p.m. Enjoy a scenic walk on the nature loop while you’re here. Or stop and have a coffee at Trager Brothers in the Community Center and make your prayer flag there.