As of the end of November, Alpha Natural Resources will have idled two of its coal mines near the community of Naoma, W.Va, citing “adverse market conditions” as their reason in both instances. In early October, 92 miners received notice of the impending layoffs. The decision follows Alpha’s filing for Chapter 11 bankruptcy in August.

One of the mines, the Edwight Source mountaintop removal mine, has affected several nearby communities in addition to Naoma, such as Sundial, Pettry Bottom and Edwight. The 2.8 billion gallon Shumate coal sludge impoundment is located 400 feet above the now­-abandoned Marsh Fork Elementary School in Sundial.

The Shumate coal sludge pond, which holds roughly twenty times the amount of coal sludge that was released in the fatal Buffalo Creek flood of 1972, is fed by Alpha’s Goals prep plant. It remains to be seen whether Alpha will idle operations at this prep plant.

The impoundment is listed by the West Virginia Department of Environmental Protection as a Class C dam — the type of dam “located where failure may cause a loss of human life or serious damage to [buildings and roads].” A report by the Office of Surface Mining and Reclamation found that if the Shumate impoundment were to fail, it would release a wall of sludge more than 20 feet high. Within five minutes, the sludge would reach the community of Edwight a half-­mile downstream. Mine Safety and Health Administration officials have also cited the dam for safety violations on multiple occasions. 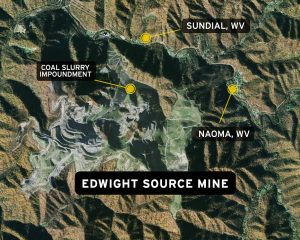 In April of this year, Appalachian Voices published a study of 50 communities in central Appalachia that are similarly “at risk” of the worst impacts of mountaintop removal coal mining.

These impacts include, but are not limited to, increased blasting, diminished water quality, and negative health, wealth and population trends. Sundial is Number 25 on this list of “Communities at Risk.”

According to Vernon Haltom, executive director of Naoma-­based Coal River Mountain Watch, these risks do not often get reported in local, or even national, media. Haltom references a recent New York Times article that claims “mountaintop removal…has all but ground to a halt.” “I wish somebody would tell Alpha that,” Haltom says. He points out that, although Alpha is idling its Edwight mine and recently filed for bankruptcy, it is still applying for permits in the area, including a new mountaintop removal mine one mile upstream from Sundial.

“Bankruptcy doesn’t mean that you go out of business,” Haltom says. “It means you get some special financial treatment, a loan from Citibank. Yeah you shut down, you lay some people off. But they don’t just immediately shut down and go away.”

According to Haltom, the back and forth between idling mines and re­applying for permits has had depressing effects on local communities like Sundial. “You see For Sale signs on a number of houses,” he says. “There’s houses been for sale for five or six years at least. So there’s nobody rushing in to buy it up. But people shouldn’t have to leave. You shouldn’t have to be a refugee.”

“It’s one thing to go someplace else to find work,” Haltom says. “It’s another thing to leave because you can’t live there because it’s toxic.”

To view maps and information about other communities at risk from the health and environmental impacts of mountaintop removal, visit: ilovemountains.org/communities­at­risk