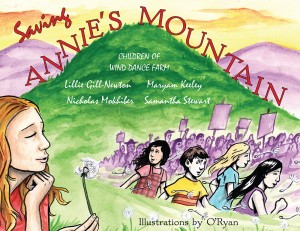 “Saving Annie’s Mountain” is a new children’s book that follows four school children to a mountaintop removal coal mining protest at Blair Mountain, W.Va., where they meet an elderly woman named Annie who tells them about her childhood experiences in the area and its history. She recalls her memories about the 1921 Battle of Blair Mountain, the largest labor dispute in American history, when over 10,000 miners banded together in an attempt to unionize. Along the way, the children learn about the harm that mountaintop removal coal mining brings to the area and the positive impact that speaking up about an issue can have.

A group of four homeschooled children, Lillie Gill-Newton (age 9), Maryam Keeley (age 11), Samantha Stewart (age 11) and Nicholas Mokhiber (age 13) wrote the book with the guidance of Leslie Milbourne, an educator at Wind Dance Farm and Earth Education Center in Morgan County, W.Va. The children were taking supplementary courses in history, writing and science at Wind Dance Farm when they wrote the book.

“The book really stems from the dearth of information on the issue of mountaintop coal removal aimed at young students,” says publisher Gary Stewart. “So, mainly out of frustration, Leslie and four of the kids at Wind Dance Farm decided to create their own take on the subject, hoping that it would be of help to others in the same predicament.”

The book is beautifully illustrated by O’Ryan, a local illustrator and activist, with images of scenic landscapes starkly contrasted with the ugly images of coal mining.

“I think everyone knows, at some level at least, that the environment influences the physical characteristics of species, and that all species have a niche,” says Leslie Milbourne. “I think it’s crucial that kids learn about the complex interactions and interrelationships between living and nonliving components of our Earth so they can be better stewards than we were.”

A Tale of Trails and Time 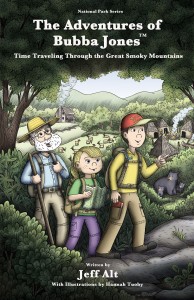 In “The Adventures of Bubba Jones: Time Traveling Through the Great Smoky Mountains,” readers follow young Bubba Jones, his sister Hug-a-Bug and their grandfather Papa Lewis on an adventure through trails and time.

“The Appalachians have something that feels old,” says author Jeff Alt. “I’ve hiked out West and various other places around the world, and my heart still brings me back to the Appalachians.”

Alt set the first book in the Bubba Jones adventure series in the Smoky Mountains because of their status as the most visited park in the country.
Alt’s own experiences with through-hiking the Appalachian Trail and overall interest in the outdoors inspired him to write children’s books. “I learned about eight weeks into my AT adventure, after my schedule of domestic society [had] left my mind, that [the woods are] the most awesome thinking room on Earth,” he says.

“Nature is so profound, so simple to access, but more complicated than any computer that we could ever design,” he says. “It’s mentally and physically healing to walk in the woods. It gives your mind time to just decompress.”
The book emphasizes the importance of experiential learning, as Bubba Jones learns many things simply by going out into nature. By getting kids excited about the outdoors, Alt hopes to change attitudes about what it means to be outside. “The whole premise is they’re not [just] hiking, they’re exploring,” he says. “It’s an adventure.”

Alt also aims to highlight how each individual’s actions have an influence on the planet. “We’re realizing now that we’re in the day and age of climate change, and it’s becoming a national security threat,” he says. “Each and every one of us, by preserving your local park or monitoring a fragile species, you are [playing] a role in not only preserving your park, but you’re serving your country.”