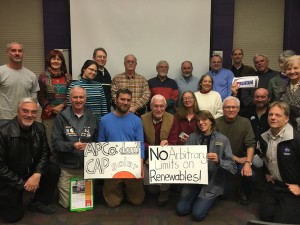 Customers of Appalachian Power Company gather in Roanoke to learn about the company’s resource plan and the benefits of expanding clean energy’s role going forward.

Dozens of energy customers gathered in Roanoke on Tuesday evening for one reason: the electricity system in this country is undergoing some exciting changes, yet utilities’ choices can still hold Virginia back from rapid progress toward a diverse energy mix.

Residents are showing they want to learn more and get involved in these critical decisions.

Utilities in Virginia must submit plans, called Integrated Resource Plans, discussing their intended approaches to meeting customer demand. State regulators require these plans at intervals, providing a window for customers to engage with their electricity provider. The State Corporation Commission is currently considering Appalachian Power Company’s latest plan, which is set to be heard in an official proceeding before a regulatory panel on Tuesday, Dec. 8.

This newest plan is notable in many ways. The company acknowledges that market changes have made renewable energy economically advantageous. Meanwhile, federal standards on carbon pollution are in a final form, another factor that can drive change. But here are a few points that illustrate how APCo’s plan stands to impede Virginia from harnessing its full renewable energy potential at the scale that would most benefit for customers and the economy.

The Effect of the Clean Power Plan

The CEO of APCo parent company American Electric Power, Nick Akins, recently stated that “The Clean Power Plan is no doubt a catalyst for the investments … to support not only the movement of the customers but also reducing the environmental footprint.”

Though rather non-specific, this comment is encouraging and reflects a recognition of the beneficial nature of the U.S. Environmental Protection Agency’s actions.

The flexibility, even leniency, that characterizes the Clean Power Power offers protection against legal challenges but is also a potential shortcoming when it comes to achieving long-term pollution reductions while states go about complying with the standard. Sophisticated computer modeling can help utilities determine cost-effective ways of meeting targets. At this point, APCo has only modeled the consequences of a carbon tax. The review process for its current resource plan is an opportunity for regulators to ask the company to show different possible approaches for reducing carbon emissions enough to meet new standards. If they do, it could present ways to meet the standards that will economically benefit customers, like greater reliance on bill-shrinking energy efficiency programs to meet demand.

The headlines over the summer when APCo released its resource plan were striking: “Appalachian turns toward sun and wind for future energy.” It sounded like a major shift was taking place. And there was a perceptible change in tone in the plan itself: “In the recent past, development of [renewable] resources has been driven primarily as the result of renewable portfolio requirements. That is not universally true now as advancements in both solar [photovoltaic] and wind turbine manufacturing have reduced both installed and ongoing costs.”

But how big a shift is APCo really proposing, how fast would it happen? After several weeks of analysis, we can say this much: the shift could be bigger, but APCo is imposing some strict, arbitrary limits on the solar projects and energy efficiency programs it’s pursuing.

Coal is decreasing in APCo’s resource mix, as one plant goes out of service and other is converted to natural gas, which seems as though it would make room for increased use of a popular, proven technologies like solar. But APCo’s preferred plan includes 835 megawatts of new natural gas-fired power, which detracts from renewable energy investments. A new gas-fired power plant would lock us into decades of dependence on a fossil fuel with potentially more volatile price swings and an environmentally degrading life-cycle that includes fracking and transmission by pipeline.

Why does APCo propose to stop at 510 MW of solar between now and 2029, when the fuel source is free and the resource is cost-effective? It appears these limits are without reason or rhyme, so regulators will likely ask APCo to explain where its numbers come from and demonstrate why is preferred plan is the best deal for customers.

Energy efficiency programs seek to capture energy that otherwise gets wasted, capitalizing on home auditing technology and expertise, modern appliance and HVAC design, and other strategies to make sure customers enjoy the same amount of comfort and convenience while using less energy. Utilities including Duke Energy and Georgia Power are reducing demand through from efficiency programs, in the neighborhood of 1 percent energy saved every year,, avoiding the need for some costlier new peak or baseline generation additions — like natural gas fired plants. The question is: does APCo approach energy efficiency in a way that values these benefits as lasting and quantifiable?

APCo’s plan only expects a 1 percent improvement in energy efficiency over the next 15 years. As with the company’s solar modeling, it’s our sense that APCo is artificially limiting efficiency as a resource in its plans. The company also cites customer “acceptance and saturation” as a factor that stands to determine program cost and potentially the total impact on energy use. We know from listening to customers that people are eager to better control their energy use, and efficiency programs are a popular, basic service. When several new programs become available Jan. 1, 2016, we look forward to seeing them promoted and Appalachian Voices will do its part to get the word out about how residents can shrink their bills.

APCo does provide much-needed weatherization programs for its low-income customers that are managed by providers in the service area, which can provide work in good, often career-length jobs. But program offerings that are not income-qualified remain limited, and in order to reach Virginia’s voluntary goal of 10 percent energy efficiency by 2020, a non-binding target endorsed by General Assembly and Governor McAuliffe, APCo must design and get approval for much more robust programs.

Meanwhile, more and more APCo customers are opting to go solar each year, investing in their energy future and using less energy from the grid. Yet, that trend is also not encouraged in APCo’s plan — rather, the company tacitly subscribes to the existing system of fees, system size limitations, permit waiting periods, and other restrictions.

Plans Are Not “Set in Stone” — Stay Committed to Change

Clean energy investments proposed in APCo’s plan such as solar farms and wind installations aren’t exactly set in stone; they are contingent on approval by the State Corporation Commission, which may depend on whether current federal tax incentives are extended, reduced, or allowed to expire. According to APCo’s plan,decisions about whether or not to proceed will be made later, based on whether there are “suitable opportunities.”

It is critical that APCo customers remain engaged to support energy freedom and diversifying Virginia’s energy mix with renewables during the review of APCo’s energy plan and beyond. So take a moment to send a comment now.

Want to help spread the word? How about taking a picture of yourself holding a handwritten message or captioned with text about APCo’s plan? Try something like:

Tag us on social media or email your photo to hannah@appvoices.org, and thanks for supporting clean energy!