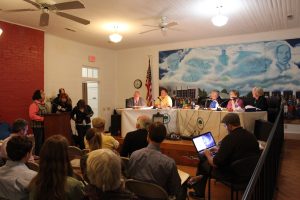 Stokes County, N.C., resident Tracey Edwards speaks in favor of a moratorium on fracking during a meeting of the Walnut Cove Board of Commissioners earlier this month.

The town of Walnut Cove, N.C., and Rockingham County recently joined the small but growing list of localities where commissions of elected officials have passed anti-fracking moratoriums.

On Nov. 10, a little more than a month after the passage of a county-wide moratorium, residents of Stokes County once again raised their concerns with fracking, this time seeking a moratorium from the board of commissioners of Walnut Cove — the first municipality to take up the issue.

Tracey Edwards, a lifelong resident of Stokes County, spoke to the commissioners and other community members when she said, “We have people here out of a four-letter word: love. It’s love of where they live, They love their county, they love their neighbors and they want to live in peace and have a clean environment. That is all anybody really wants.”

Residents across the state are looking to their local government officials to oppose fracking since pleas to decision makers in Raleigh have largely fallen on deaf ears. Thousands of citizens have called or emailed their representatives during the past two years asking to ban fracking in the state. During the N.C. Mining and Energy Commission’s comment period on rules proposed to regulate fracking in North Carolina, a record 200,000 comments were submitted, in vast majority against the rules and against the practice of fracking itself.

“The people at the local level want a voice in what affects our way of life,” Linda Hicks of the group No Fracking Stokes County said “The Mining and Energy Committee has formulated regulations that protects the oil and gas industry and not us”

Last year, the state legislature prohibited local bans on fracking. And in the final hours of this year’s session, in an attempt to usurp all power over oil and gas decisions in the state, lawmakers passed a bill prohibiting any local control and regulation of the fracking industry.

More than 70 mayors, commissioners, and other local elected officials across the state sent a letter to Gov. Pat McCrory on Nov. 5 describing why oversight of such a potentially harmful industry is critical at the local level:

“The notion that our communities have the right to bar or limit activities which threaten public health or the quality of life of their residents has a long tradition in North Carolina’s law. This principle is the basis of common health ordinances and local land use rules, including zoning, which often involve trade-offs with property rights and other interests. Yet the oil and gas industry has the audacity to insist that this basic principle of local control should not apply to its operations.”

The restriction of local authority came under fire during both recent moratorium hearings, and residents concern with handing over control to Raleigh extends beyond fracking. A poll released yesterday by the N.C. League of Municipalities found that more than 75 percent of respondents preferred their local governments have control over billboard regulations.

“We need to send a message to the legislators in Raleigh that they can’t mandate to us how we run our county … I commend you and applaud you for taking this stance,” Rev. Hairston of Stokes County told Walnut Cove commissioners.

Edwards shared that sentiment in her remarks. “We do not want the state to define what we can do,” she said. “You guys are our local elected officials, we need you to take care of us, that’s why we elect you.”

While the three-year moratorium passed in Walnut Cove, and more localities are considering similar measures, officials in Raleigh remain hell-bent on bringing fracking to the state — even if that means ignoring the rights of citizens that could suffer the consequences.