Surface Mine Proposal Puts Nearby Community and Endangered Bats At Risk 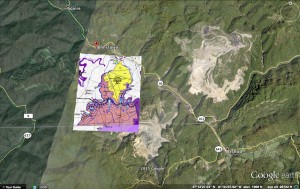 In September a coalition of environmental groups announced that it will sue the Office of Surface Mining Reclamation and Enforcement and U.S. Fish and Wildlife for failing to protect a threatened bat species on two mountaintop removal coal mines in West Virginia.

One of these sites, the proposed Jim Justice-owned Big Creek Mine in McDowell County, will sit directly above a church and upstream from an early childhood education center near the community of Bishop.

According to a press release from the Center for Biological Diversity, “[The mine] will also destroy more than five miles of streams, threatening another species that has been proposed for protection, the Big Sandy crayfish.”

The proposed mine will be in addition to two currently existing surface mines within a one-mile radius of Bishop. In April of this year, Appalachian Voices published a study of 50 communities in central Appalachia that are similarly “at risk” of the worst impacts of mountaintop removal coal mining. These impacts include, but are not limited to, increased blasting, negative health, wealth and population trends, and diminished water quality. Bishop is No. 2 on this list of “Communities at Risk.” 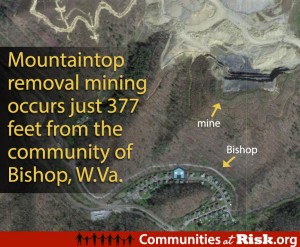 Advocates of the Obama administration’s recently proposed Stream Protection Rule say strong federal guidelines could go a long way in reducing many of these impacts, but, as some point out, it still allows for streams to be filled with overburden from mountaintops that have been removed in order to access coal seams.

To view maps and information about other communities at risk from the health and environmental impacts of mountaintop removal, visit: ilovemountains.org/communities-at-risk

CORRECTION: An earlier version of this article mistakenly identified the northern long-eared bat as endangered. It is listed as threatened under the Endangered Species Act.