Asphalt: A Sticky Issue for Communities 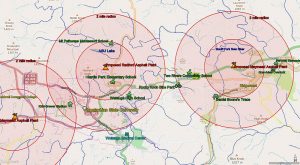 There are nearly 2.6 million miles of paved roads in the United States, and 1.3 million miles of unpaved roads. In the early 2000s, the Federal Highway Administration launched a nationwide campaign to speed up the paving of rural roads in order to provide better access to economic opportunities. Improving roads is critical to the economy of Appalachia, but with roadbuilding comes asphalt — a sticky, black, petroleum-based product used for surfacing roadways — and the strong-smelling plants that process it.

Citizens in Watauga County, N.C., recently organized to protest separate proposals to build not one but two new asphalt plants in their tourism-driven community of 54,000, already served by one asphalt plant.

The first plant, proposed by Appalachian Materials, LLC, an affiliate of Radford Quarries, would reside on the backside of Howard’s Knob mountain, less than two miles from Boone, N.C.’s historic downtown. The second facility was proposed by Maymead Inc. for a site along U.S. 421 Scenic Byway midway between Deep Gap and the town of Boone.

Both facilities would sit adjacent to residential neighborhoods and include elementary schools — Parkway Elementary and Hardin Park Elementary — within their two-mile impact radius. The Maymead plant would be sited less than a mile from the Blue Ridge Parkway and the New River, a designated National Heritage river.

During the same time period, Radford Quarries also submitted a proposal for an asphalt plant in neighboring Ashe County, directly to the north.

Prior to the proposed asphalt plants, Watauga County had no provisions for citizen input or notification of residents when considering High Impact Land Use permits. Due to intense public backlash, the county held a series of public hearings on each of the proposed facilities.

“I have just the facts,” said resident and former Boone Town Council member Liz Riddick during a hearing on the Maymead facility. “Fact: Asphalt plants emit cancer-causing emissions. Fact: Two elementary schools are very close to the facility. Fact: Your job as county commissioners is to protect constituents.”

Under the newly formed High Country WATCH, a chapter of Blue Ridge Environmental Defense League, the residents successfully petitioned county commissioners to add important protections to the county’s ordinance governing high impact industry, including 750-foot setbacks from residential property lines and 1500-foot setbacks from scenic byways. The ordinance also includes a mandatory public hearing for Category 1 HILU permit applications, including such industries as asphalt plants, as well as a stipulation that adjacent landowners must be notified of a permit application once it is received.

Asphalt plants are permitted to release a stew of toxic chemicals into the air each year, including volatile organic compounds, carbon dioxide, and numerous known carcinogens such as benzene, formaldehyde, mercury and hydrogen sulfide. Although the U.S. Environmental Protection Agency states that “current data are not sufficient for qualifying the acute and chronic health risks of exposure to asphalt,” the Occupational Safety & Health Administration lists health effects from exposure to asphalt fumes that include headaches, skin rash, fatigue, throat and eye irritation, cough and skin cancer.

Asphalt processing is also associated with economic concerns. According to a study by BREDL, homeowners in neighboring Avery County “suffered an average drop of 27 percent in property values” after an asphalt plant was built in their community.

Both the Radford and Maymead permits were rejected by county officials on technical details, but appeals filed by the two companies are up for review in October. For more on the developing story, visit highcountrywatch.org