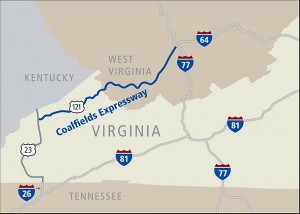 Ever since Appalachian coal began to power the Industrial Revolution, this fuel has influenced the location and condition of roads in the coal-bearing regions. In Virginia, a highway project currently under consideration — and partially under construction — is raising questions about the relationship between coal and the commonwealth’s transportation infrastructure.

The Coalfields Expressway was proposed as a way to link U.S. Route 23 in Virginia with Interstate 77 and Interstate 64 in West Virginia, attract new business and tourism to the area and diversify the local economy away from a dependence on coal mining. In the 1990s, the proposed four-lane thoroughfares in both states were designated Congressional High Priority Corridors. And in 2001, the Virginia Department of Transportation completed its environmental review of a host of road proposals, settling on a preferred route.

Yet the effort was stymied by the cost of constructing a new highway in the rugged Appalachian landscape — until West Virginia found a financial workaround. The Mountain State developed a partnership where mining companies would extract coal along the highway route, providing a rough-grade roadbed at a steep discount to the state in return.

In 2006, the Virginia Department of Transportation and two coal companies — Alpha Natural Resources and Pioneer Group — decided to follow the West Virginia model and began investigating a similar plan for the commonwealth’s 26-mile portion of the Coalfields Expressway, also known as Route 121. A small portion of the road has been approved and is in various stages of construction, but the remainder of the highway is on hold awaiting further review.

After the coal companies joined the process, the public-private partnership announced a new preferred route, one that wasn’t part of the 2001 review. The announcement spurred local debate over whether the expressway would bring promised economic development, and raised questions about how high of an environmental cost is allowable in the name of a new highway.

The route change also attracted fresh scrutiny from the Federal Highways Administration, which is working with VDOT on a new study of the road’s positive and negative impacts that is expected to be released this fall.

Jessica Bier lives near Pound, Va., close to the southern terminus of the Coalfields Expressway. She has studied the various environmental review documents over the past decade. After poring over the documents associated with the coal company partnership and the new route, Bier concluded that “Instead of a project designed to maximize utility and public good, it was now about maximizing access to coal reserves to maximize coal company profits.”

The new route shifted the location of the roadway, sometimes by two or three miles, to better align with the coal reserves. According to a VDOT report, “Compared to the previous route, the new location would maximize coal recovery, seek to avoid abandoned underground mine areas, and provide a somewhat straighter alignment for the highway.”

Representatives from VDOT say that recovering coal reserves from the roadbed is incidental to the construction of the highway. But opponents of surface mining, including nonprofit organizations Southern Appalachian Mountain Stewards, Appalachian Voices and Sierra Club, are quick to point out that the partnership with the state also qualifies the companies for the Government Finance Exemption.

This state clause means that the coal-mining operations associated with the Coalfields Expressway would be subject to the environmental standards that govern highway-building rather than federal surface mining regulations. The Virginia Department of Mines, Minerals and Energy would be responsible for ensuring that mining occurs only within the boundaries of the new route and is an engineering necessity.

In 2012, VDOT released an assessment of the environmental impacts of the revised project, a study that the nonprofits found inadequate. The groups urged the Federal Highways Administration to require a more comprehensive review to provide the public with information about how the new route would affect natural resources and community health compared with alternative transportation options. The study, called a supplemental environmental impact statement, would also consider the economic effect of relocating the route away from several town centers.

“The impacts of mountaintop removal are significant, and have been well documented in peer-reviewed studies,” says Kate Rooth of Appalachian Voices. “Our concern is not with building a road, but rather, with the reliance on destructive mining practices to build it.”

Following the assessment’s release, Marley Green, a Sierra Club organizer at the time, stated that a more thorough analysis was needed to determine how the route will affect the health of nearby residents, particularly in light of studies that have connected health problems to surface mining. He also questioned whether the stream damage that would result from the new route might overwhelm already-impaired waterways and violate the Clean Water Act.

The Federal Highways Administration agreed with the request for a more robust review, and the federal agency and VDOT are now conducting a supplemental environmental impact statement. 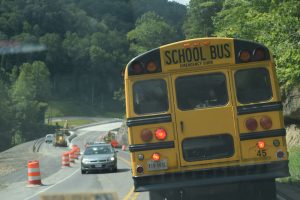 Buses transporting students to and from Ridgeview High School on Route 83 must contend with a steep descent and frequently clogged roadway. Photo by Molly Moore

Environmental advocates including Rooth hoped that the additional analysis provided by the new comprehensive review will help determine whether the Coalfields Expressway — which has an estimated taxpayer price tag of $2.8 billion — is indeed the strongest long-term economic investment on the table.

In the winter of 2015, Southern Appalachian Mountain Stewards, Appalachian Voices and the Sierra Club convened several hearings to solicit citizen input regarding alternative transportation improvements that could help boost the area’s economy. The organizations requested that VDOT consider the citizen proposals alongside the various routes for the Coalfields Expressway, both as alternatives to the new highway and as ideas for future transportation planning.

Among the proposals voiced during those forums were calls to either widen portions of Route 83, the state highway that parallels the proposed route of the Coalfields Expressway, or make it a four-lane road in its entirety.

“Transportation dollars should be spent on the secondary roads that need attention and on trail systems that could increase tourism/recreation opportunities,” notes Bier.

Area residents also suggested modifications to widen or add bridges to other nearby state highways, such as Route 80 and Route 63, and emphasized the need to improve traffic patterns in several town centers by adding stoplights, turn lanes and traffic circles. Improving access to parks and recreation areas by paving gravel roads and enhancing signage was also a top priority at the sessions, with locals highlighting the John W. Flannagan Reservoir and Cranes Nest Campground in Dickenson County.

Residents also suggested increased investment in the regional agency on aging, which provides the sole public transit option in the area, and also recommended support for other projects, such as the Spearhead Trails motorcycle and ATV Park, that have already had a positive impact on the economy.

Like many local leaders, Dickenson County Board of Supervisors Chair David Yates sees roads as economic opportunities. He is in favor of improving Route 83 by increasing the number of turn and passing lanes on this two-lane highway, which is easily clogged by industrial truck traffic.

Yates also supports the Coalfields Expressway, and believes it would make the county a more appealing location for light manufacturing. “The transportation piece would put us on an even playing field,” he says. “Our people have an intuitive feeling for solving problems and [making] things work.”

Others are more skeptical of the claims that the expressway project would bring economic prosperity. Bier questions claims from VDOT and public officials that the road will result in long-term job creation. “Time, money and efforts of citizens, public officials and agencies would be better spent on looking for other ways to improve [the] economic outlook of the area,” she adds.

Despite the citizens’ alternatives, the government team currently preparing the supplemental review will compare only the four coal-synergy routes: the one outlined in the 2012 study and three of the routes from the 2001 deliberations, including the route originally endorsed in 2001 — leaving the grassroots proposals out of the analysis.

“It’s critical that VDOT and Federal Highways Administration keep in mind that the purpose of the Coalfields Expressway was to improve transportation for local communities and diversify the regional economy which has for so long depended on coal mining,” says Kristin Davis of Southern Environmental Law Center. “The purpose is not to simply maximize coal mining along the route, and it’s the role of VDOT and FHWA to consider the impacts of a full range of reasonable alternatives and ensure that they are consistent with those purposes.”

Bier and other residents have expressed concern that should the Coalfields Expressway break ground using the “coal synergy” approach, construction might progress just far enough for the companies to recover the coal, but that private and government funding might be too shaky or insufficient to see the highway part of the project to completion. Complicating the matter, Alpha Natural Resources, one of the companies implicated in the coal synergy partnership, declared bankruptcy during the summer of 2015.

Heather Williams, a project manager at VDOT, said she could not comment on the project’s funding, noting that the agency will look into financial feasibility only after the supplemental analysis is completed and a final route is chosen.

The comprehensive review is expected to be released this fall, with an opportunity for the public to provide in-person comments in late winter or early spring. Only then will the agency choose a route and assess the financial viability of the project, Williams says.

Meanwhile, Davis hopes that the study underway will provide the public with a full understanding of how the agencies reach their conclusion. “If [VDOT and the Federal Highways Administration] come to a decision after looking at all direct and indirect and cumulative impacts of a coal synergy approach, the public needs to understand what information that decision was based on,” she says.