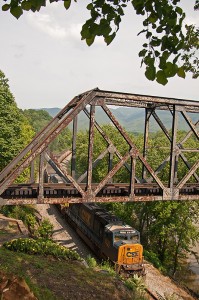 For more than 100 years, railroads have roared through the Appalachian mountains, connecting the region to the rest of the country, and moving resources and people in and out of the region.

Trains first entered Appalachia in 1851, when the Baltimore & Ohio Railroad Company extended one of its lines to the town of Piedmont, which was located in what was then Virginia. As the rail line expanded, it “was considered so important during the Civil War that its route affected the shape of the new state of West Virginia,” according to the West Virginia Department of Transportation.

In most of the region, however, railroads became an important economic factor beginning in the 1890s with the rise of the lumber and coal industries. R. Scott Huffard Jr., of Lees-McRae College, explains that with the railroads came outside investors who extracted these natural resources. In this context, he describes the railroads as “the leading edge of resource exploitation.”

Today, the link between the railroads and resources, especially coal, remains strong. According to the Association of American Railroads, “No single commodity is more important to America’s railroads than coal.”

The energy sector’s shift away from coal toward natural gas in the past decade has negatively impacted the railroad companies that transport much of the coal. The Association of American Railroads reported in July 2015 that coal traffic had fallen almost 23 percent from its peak in 2008.

Dr. David B. Clarke, director of the Center for Transportation Research at The University of Tennessee, Knoxville, predicts that this decline will “affect the health of the railroad industry, in my opinion, especially the two eastern railroads: Norfolk Southern and CSX. We’re already seeing that reflected in their stock prices and their earnings.” 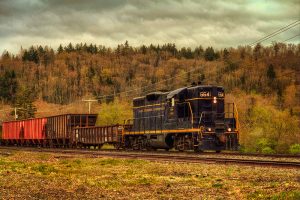 In contrast, natural gas is transported primarily by pipeline in the United States, though according to the Omaha World-Herald, Union Pacific Railroad has applied to the Federal Railroad Administration to be the first railroad permitted to carry natural gas in its liquefied form.

According to Clarke, more trains are now carrying crude oil from the Bakken shale formation in North Dakota and Montana, which is “poorly served by the pipeline network,” in part “to recover some of the lost energy business” resulting from the shift away from coal. In February 2014, The Wall Street Journal reported that roughly 70 percent of Bakken oil was transported by train and was significantly more combustible than oil from other sources.

This increased volume, together with its higher volatility, has contributed to the increased frequency of well-publicized derailments. Bakken crude oil was being transported by the April 2014 train that derailed in Lynchburg, Va., spilling nearly 30,000 gallons of crude into the James River and bursting into flames. It was also being transported by the train that derailed in Mount Carbon, W.Va., the following February, sending a massive fireball into the sky.

In response, the U.S. Department of Transportation announced new regulations to oversee the transport of these hazardous materials. In May, the agency announced its final rule to increase the safety of trains carrying flammable materials. According to Progressive Railroading, the new rule “focuses on safety improvements designed to prevent crude-by-rail accidents, mitigate consequences if an accident occurs and support emergency-response efforts.”

But The New York Times reports that many safety advocates are concerned that the new rule does not go far enough to address their concerns. Senator Maria Cantwell (D-Wash.) told The Times, “It does nothing to address explosive volatility, very little to reduce the threat of rail car punctures, and is too slow on the removal of the most dangerous cars.”

Clarke worries about the negative impact these changes in the railroads may have on many small communities in Appalachia. If coal is no longer as profitable for the rail companies, then the tracks may be abandoned leaving some areas without access to rail service. “And once you loose rail service, then you’re at a disadvantage for any future industrial development,” he says.

Historically, railroads have played an important role in the economic development of Appalachia. But with so many changes underway, they may play a different role in the region’s future.