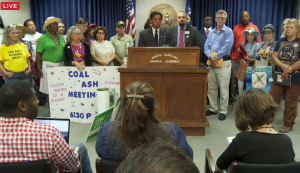 Raleigh, N.C. – Residents from across the state gathered in Raleigh today to announce a new alliance of North Carolinians directly impacted by coal ash and to call on Duke Energy, the General Assembly, the Department of Environment and Natural Resources, and Governor McCrory to find permanent, safe solutions for coal ash that protect all communities from the toxic waste.

>> Video of the press conference

The Alliance of Carolinians Together (ACT) Against Coal Ash is a statewide coalition of North Carolinians who live next to a current coal ash pond or proposed ash fill sites. ACT Against Coal Ash was formed in late July, when over 100 delegates from communities across the state came together in Belews Creek, N.C., home to one of Duke Energy’s largest coal-fired power plants, to share their experiences and discuss common goals.

“I am thankful for the hands that have reached across the state to form this bond,” says Bobby Jones of the Downeast Coal Ash Coalition in Wayne County. “This alliance is strong and we will protect our water, our environment, and our lives from corporate greed and the bottom line.”

Duke Energy stores more than 108 million tons of coal ash in leaky pits and landfills across North Carolina; in some places it is illegally leaking into surface waters that supply drinking water to millions of people. The waste is laden with toxic heavy metals, including hexavalent chromium, a carcinogen found at unsafe levels in hundreds of drinking water wells within 1,000 feet of Duke’s coal ash sites.

More than 300 families living near Duke’s coal ash ponds have been notified by state officials that their water is unsafe for drinking or cooking. Larry Mathis lives in Belmont, N.C. within 1,000 feet of the coal ash ponds at Duke’s G.G. Allen Power Plant, and next to an unlined landfill of nearly 280,000 tons of Duke’s coal ash, although the site is no longer owned by the utility. His community’s well, which is operated by Aqua N.C., a private water company, is contaminated.

“Our community well tested 28.6 times higher for hexavalent chromium than the state’s limit,” says Mathis. “We are living off bottled water and our property is worth nothing. Duke says they’re a good neighbor, but they need to admit they’ve done wrong and step up to do better. It’s not just our house and our land, it’s our home.”

For decades, communities living near Duke Energy’s fourteen N.C. coal-fired power plants have been subjected to air and water pollution. A recent study co-authored by Duke University found that coal ash not only contains toxic heavy metals, but is also radioactive, posing even greater health risks than previously understood.

Tracey Edwards, a life-long resident of Belews Creek and member of the Stokes County Residents for Coal Ash Cleanup, has seen and felt the health effects of coal ash pollution in her community first hand.

“We have been exposed to pollutants from Duke Energy’s coal plant for more than 40 years. I’ve seen so much cancer, neurological problems, strokes, and respiratory problems in my community,” reflects Edwards. “The public has been deceived into thinking it’s safe to live near these sites when it’s clearly not. I’m tired of going to the funerals of the people I love.”

ACT Against Coal Ash members are disappointed by the lack of transparency from Duke Energy. The company is the subject of multiple criminal investigations and recently paid record-breaking settlement costs for violations of the federal Clean Water Act and Clean Air Act. Meanwhile, Duke recently released self-funded studies claiming that the plumes of contaminated water coming from their ash ponds are not affecting neighbors’ wells.

“Duke says they’re not responsible for our contaminated water, but do we trust Duke Energy?” asks Mathis. “They just pled guilty to nine violations of the Clean Water Act. Trust Duke? I think not.”

Dawn Crawley owns a farm in Sanford, N.C., near a proposed coal ash landfill. Duke Energy plans to send ash from multiple other locations to new, lined landfills in Lee and Chatham counties. Duke will no longer be responsible for the ash, as the landfills will be owned and maintained by a limited liability company, Green Meadow.

“For me, it’s not whether the liners will leak, it’s when,” says Crawley. “I’m worried about the groundwater. Streams come right across my pasture and I use the springs to water my animals. Duke won’t admit they’ve done wrong, why would we expect Green Meadow, an LLC of an LLC, to admit wrongdoing?”

“We’re the ones most affected by their decisions,” says Crawley. “We deserve a seat at the table.”