On Monday evening, Duke Energy released the executive statement from the company’s study assessing the groundwater contamination at two of their largest coal ash sites in North Carolina, the Allen and Buck Steam Stations in Belmont and Salisbury, respectively. Unsurprisingly, Duke Energy’s finding suggested they were likely not responsible for the contamination found in the drinking water wells of over 200 households within 1,000 feet of the company’s coal ash dumps.

Based on data obtained during this CSA, the groundwater flow direction, and the extent of exceedances of boron and sulfate, it appears that groundwater impacted by the ash basin is contained within the Duke Energy property boundary.

Check out local Belmont resident’s reaction to the the summary:

Duke Energy has not proven that contamination from ash basins isn’t moving in the direction of the neighbors’ wells. They have only said what “appears” to be the case, and while they may hope it gives them some legal cover (though that certainly remains to be seen), it does nothing to assuage the overwhelming concerns and fears of families who have been told their water is unsafe for drinking and cooking.

One glaring omission is that Duke Energy did not test for hexavalent chromium, a dangerous heavy metal and known carcinogen that has been found at high levels in dozens of private wells neighboring the utility’s coal ash dumps. According to the Charlotte Observer, Duke did not report results for hexavalent chromium because of a “a lack of time to collect and analyze the data.”

This isn’t the first time Duke Energy has neglected to test for the harmful contaminant; they have never tested for hexavalent chromium, and therefore there is no historical data on which to base their claims that the heavy metal is not migrating to neighbors’ wells from the company’s coal ash ponds.

Trivalent chromium can transform into its more toxic form, hexavalent chromium when it comes in contact with high-heat industrial processes (like burning coal). Exceedances for total chromium have been found in groundwater monitoring results conducted by Duke Energy at their property line. How much of that chromium is hexavalent is unknown.

Duke Energy’s release of the report comes on the heels of a N.C. Department of Environment and Natural Resources blog post stating that the agency has tested 24 background wells and found levels of contaminants similar to those in private wells.

Although DENR claims that the levels are similar, the agency has yet to make the actual levels public. However, at a community meeting hosted by the N.C.Department of Health and Human Services and DENR last Thursday, Dr. Ken Rudo, the state toxicologist began the meeting by disclosing the levels of hexavalent chromium found in the background wells. 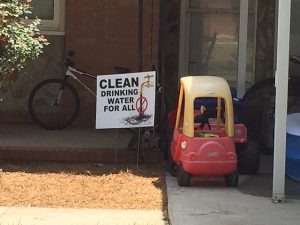 So why are both DENR and Duke making statements that hexavalent chromium is naturally occurring when the numbers don’t necessarily demonstrate that?

“…much more concerned about the effects of hexavalent chromium because the science is so clear that hexavalent chromium is a chemical that has significant risk associated with it. It’s a mutagenic carcinogen, so any level can pose a risk, by definition.”

When asked by a resident if Dr. Rudo would drink her water, he firmly replied, “no”.

So where does this leave the residents who are living on bottled water? Still confused and scared about the safety of their water, nervous about their home values, wondering if they have been giving their children contaminated water to drink.