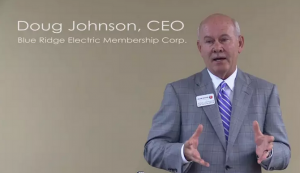 Urge your utility provider to provide debt-free energy efficiency financing for your community.

On a sweltering day earlier this month, several residents of North Carolina’s High Country packed into cars and made what for some is a one-hour trip to the annual membership meeting of their rural electric cooperative.

The reason? To tell the Blue Ridge Electric Membership Corporation (BRE) Board of Directors they want incentives to improve their homes’ energy efficiency, specifically, though an “on-bill” financing loan program.

While this may sound too boring to encourage anyone to take hours out of their day to address the co-op board, the benefits of such a program are so exciting that they warranted the trip.

On-bill financing is a type of loan offered by utilities that pays for energy efficiency upgrades with no upfront cost to the homeowner or renter, making these improvements accessible to people of any income level. Loan recipients receive immediate savings on their electric bill after the upgrades, which may include insulation or air duct sealing. A portion of that monthly savings goes directly to the resident and the rest goes to the utility to pay back the cost of the upgrades.

These programs are designed so that no money ever comes out-of-pocket for the residents, who not only see immediate savings but also immediate improvements in the comfort of their homes and often their health. When all the upgrades are paid for (usually in five to ten years), the resident can see as much as a 40 percent reduction in their average monthly electric bill. Further, on-bill finance programs have substantial positive impacts for local economies and job creation.

The folks from North Carolina who traveled to BRE’s annual meeting wanted to advocate for these benefits. Mary Ruble, who, like almost anyone, could benefit from an on-bill financing program, spoke to the BRE board. She is hopeful that members will become more engaged so they too can voice the need for energy efficiency programs like on-bill financing.

“I know for myself I never really understood I was a member. It was just an electric bill,” she reflected.

Marisa Schor, another BRE member, spoke about being a renter and her limited ability to improve her home’s energy efficiency. “I can’t do anything about the insulation quality or efficiency of the heating system — I’m barely allowed to put nail holes in my walls,” Schor told the board.

Schor believes on-bill financing is part of the solution for her situation and for other renters. “What this program would do, however, is make it easy and convenient for landlords to increase the energy efficiency of their rental units,” said Schor. “As a tenant, this program would allow me the opportunity to easily reduce my energy consumption and would provide me with an easy, convenient and sustainable way to save money on my electric bill.”

BRE’s CEO Doug Johnson responded after each comment and assured the members that the co-op is seriously considering adopting an on-bill financing program for their members. In a press release after the meeting, Johnson stated publicly for the first time: “As we evolve into the utility of the future, key areas we are studying for programs to offer to members include renewables, more energy efficiency options, peak demand management, and a home weatherization/conservation program.”

Listen to a recorded presentation by Johnson here.

Electric co-op customers are actually members who own equal shares in the company and have the ability to significantly influence co-op decisions and direction. Appalachian Voices is working in western North Carolina and northeast Tennessee to connect folks with their electric co-ops and help them advocate for energy efficiency programs like on-bill financing.

This is especially important in the Southeast, where almost half of all co-op customers in the U.S. reside. The Southeast also accounts for almost half of electric co-op sales in the nation, according to the latest data from the U.S. Energy Information Administration.

As electric co-op members continue to speak up — as in the case of BRE co-op in North Carolina’s High Country — demand will grow for on-bill financing and other energy efficiency programs.