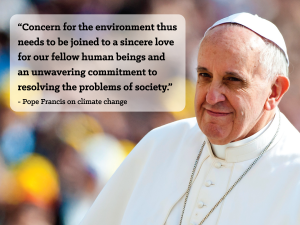 As news of Pope Francis’ pronouncement of our collective moral obligation to act on climate change whipped around the world, the planet just might have yawed and shook for a split second. The leader of more than 1 billion Catholics worldwide is a spiritual guide for many more, and his encyclical on ecology — the Vatican’s first — was anticipated to be a game-changer in the ongoing struggle to shed the world’s economies of fossil fuels and abate global warming.

Whether that happens remains to be seen, but in the meantime, leaders from all corners of the globe and all walks of life hopped on the papal bandwagon to sound their own calls-to-action, including decisive action at the upcoming international climate summit in Paris. Below is a sampling of some of these comments, and a few excerpts from the “Laudato Si’” Encyclical. (What’s an encyclical? This article has a good summary of these papal documents.)

Some gems from “Laudato Si’”