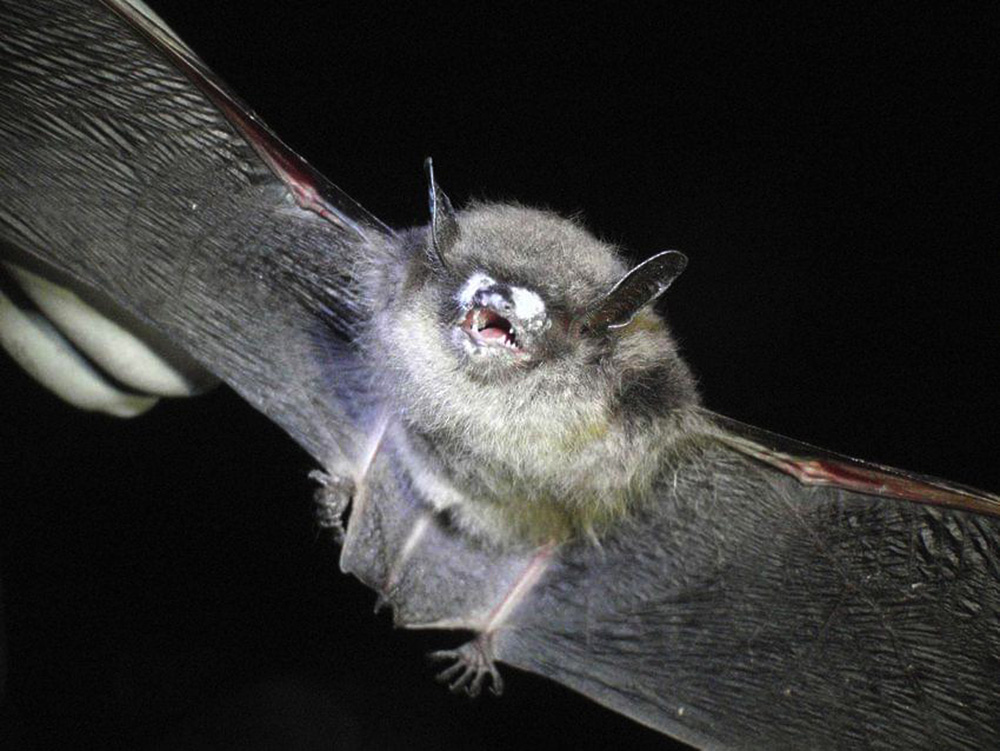 A little brown bat displays the trademark sign of white-nose syndrome. Photo by Jonathan Mays, ME Dept. of Inland Fisheries and Wildlife

For more than a decade, a killer has crept stealthily but steadily across North America. Pseudogymnoascus destructans, a white fungus with no way to move on its own, has nevertheless infested numerous caves by piggybacking underground on unwary humans. The fungus infects and often kills bats that inhabit the caves and can be spread from bat to bat. As a result, millions of the furry, flying mammals have died.

When bats hibernate, the cold-loving fungus takes advantage of the bat’s lower metabolic rate and body temperature to burrow into the skin on its wings and multiply. It causes the bats to dehydrate, their blood to become more acidic and can even cause holes in their wings. The discomfort of the infection makes the bats wake more often during the winter when food is scarce, using up their fat reserves, and the bats die of starvation or hypothermia. The disease caused by the fungus is commonly referred to as white-nose syndrome because of a characteristic white fungal growth around the bat’s nose.

The disease has been found in half of the United States, including Georgia, North Carolina, South Carolina, Tennessee, Virginia and West Virginia.

According to a study in the journal Science in 2010, white-nose syndrome may cause regional bat extinctions. Several invertebrate species that live exclusively in caves rely on bat excrement and the fungi that grow on it as a source of nutrients. These species in turn are a food source for other predators and scavengers. Bat extinctions can lead to cascading detrimental effects on the rest of a cave’s ecosystem.

“The situation is dire for cave-dwelling or cave-hibernating bats, but recent reports of a potential method of treating bats is hopeful,” says National Forest Service Biological Technician Mike Donahue.

A study published in the journal Nature Communications in January 2018 found that ultraviolet light exposure may treat the condition. Researchers are also studying probiotic bacteria and antifungal chemicals as possible counters to white-nose syndrome. All seem to offer hope but also have the potential to harm the bats or their ecosystems.