In Defense of Food Security 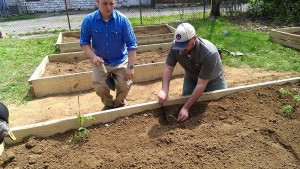 Knowing this, and also that more than 70 percent of the nation’s military come from rural America, inspired Lewis to create Growing Warriors, an incubator for connecting veterans to agriculture. Most Growing Warriors projects employ a community garden model, where staff, who have all served themselves, invite veterans to cultivate vegetables, community and self-reliance as they transition to civilian life. Lewis oversees seven projects across Kentucky and West Virginia, and his brother, a combat veteran, operates a training farm in Rockcastle County, Ky. in collaboration with Growing Warriors.

“It’s a different type of defense of the land, caring and nurturing [it],” says Lewis. “We’re teaching [the veterans] how to grow food, but they’re [also] becoming community leaders.”

Lewis believes that to change the economic landscape of Appalachia, more focus on agriculture is needed. That ideal is epitomized in Williamson, W.Va., where a reclaimed surface mine site is the future location of a new Growing Warriors chapter.

Jason Linkenholder began organizing this new chapter with fellow veterans in the Williamson Community Gardens, where six veterans are growing food and selling excess produce to local restaurants and at the farmers market. Linkenholder intends to grow hemp, vegetables, fruit and poultry on the three-acre plot at the reclaimed mine site, following a few years of soil remediation. A high school also sits atop the barren land, and Linkenholder’s vision includes engaging high school students alongside local veterans in farming.

A lot of the veterans Linkenholder encounters have minor to severe post-traumatic stress disorder from their time in the service. “Working with the PTSD, working with soil, it’s very therapeutic,” says Linkenholder. 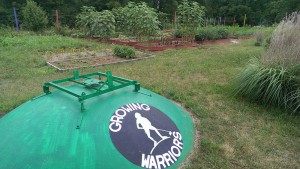 In Kentucky, produce or value-added goods grown by farming veterans are recognized under the Homegrown by Heroes label. Kentucky Proud, out of the Kentucky Department of Agriculture, manages the label as well as the Jobs for Vets program, which places veterans in agricultural jobs.

The Veterans Healing Farm in Hendersonville, N.C., founded by U.S. Air Force veteran John Mahshie and his wife Nicole, offers a community farm membership to veterans, who receive a discount, and civilians. Members collectively grow and harvest on a quarter-acre garden plot, which John maintains full-time. This year, 13 veterans and 16 civilians and their families are participating. “It’s important to have the mix because part of the purpose is to transition veterans back into civilian community,” says Nicole.

A $35,000 grant from the Entrepreneurship Boot-Camp for Veterans, which the founders attended last year, has allowed the Mahshies to expand their scope. They bought two shipping containers, one outfitted to be a bunkhouse and the other to be a kitchen and pantry, so that they may hold extended workshop retreats on sustainable, healthy living skills for veterans from across the country.

The grant also allows the Mahshies to take a salary from their farm, actualizing these entrepreneurs’ dream project into a career.