Worried about Water? The EPA’s New Tool Can Help

Maps provide a valuable perspective of the lay of the land, the ability to identify local waterways, their length and proximity to urban or agricultural areas, and their connectivity as they wrap around hills or snake through open plains. But there was always something you couldn’t learn about rivers and streams near your community by just looking at a map, at least until now.

On the 40th Anniversary of the Clean Water Act last week, Appalachian Voices was so caught up celebrating with the release of our “Clean Water Act at 40” report and video, we almost missed the release of the U.S. Environmental Protection Agency ingenious, easy-to-use website and mobile app, “How’s My Waterway?” Just enter your town, or let the tool find your location, and you’ll see a map like most others. But in a few clicks, you can find out which of your local waterways are polluted — and for those that are, what’s being done about it.

Once a river or stream is selected, “How’s My Waterway?” provides a rundown on the type of pollution reported for that waterway. Keep clicking and you’ll find a wealth of technical information and reports with descriptions of each type of water pollutant, likely sources and potential health risks. Pretty cool, huh? 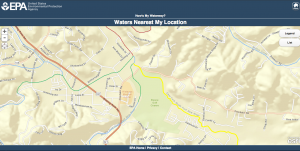 Checking up on my local waterways using the EPA's new "How's My Waterway" tool.

So cool, that I’ve been digging into water data that I didn’t even realize was available. After letting the tool find my home in downtown Boone, I zoomed in on the Middle and East forks of the New River where they run through the eastern edge of town. According to the 2010 data used in creating “How’s My Waterway?”, both stretches of water are impaired for aquatic life. Looking at the map, the streams border the Boone Golf Course.

It’s no secret that nutrient runoff from golf course irrigation can threaten stream health and aquatic life. But that’s where I hit a dead end. There hasn’t been as much monitoring or reporting on the headwaters of the New as there has been on many other, more threatened waterways.

Red signifies impaired waterways on this map of the rivers and streams surrounding Whitesville, W.Va.

That’s what the map looks like after a search for “Whitesville, W.Va.” Click on Marsh Fork, which runs directly south from the town, and you’ll get a clearer picture of what caused the river to become impaired for fishing, recreation and public water supply. According to the EPA’s 2010 Waterbody Report for Marsh Fork, heavy metals and fecal coliform bacteria have contaminated the stream for years, reducing oxygen levels that aquatic wildlife needs to survive and posing a threat to human health.

The practicality and convenience of “How’s My Waterway?” may be its best asset. Not many of us have the time to sift through databases searching for the creek behind our community or our favorite fishing spot. It’s a comforting thought, the ability to run a quick search before going out on the river or to check your phone just to make sure that seemingly pristine swimming hole is safe.

It was no accident that this clever tool was unveiled on the 40th anniversary of the Clean Water Act. In fact, without the landmark law, the public would never have access to this amount of information — the reports used to create the tool are provided under the Clean Water Act.

We’ve come a long way in 40 years, but there is still a lot of work to be done to protect and restore our waterways. So go ahead, give your local streams a checkup using “How’s My Waterway?”.