A Dinosaur in the Tennessee River 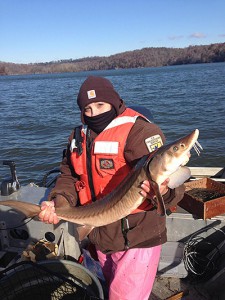 The lake sturgeon, Acipenser fulvescens, is the largest and longest-living freshwater fish native to the southeastern United States. They can live for up to 150 years and there are recorded catches of sturgeon that were over eight feet long and weighed more than 300 pounds.

In evolutionary terms, this primitive fish has changed little since it swam among dinosaurs. The species has existed since the Upper Cretaceous Period, 136 million years ago. Today, it is listed as either threatened or endangered in 19 of the 20 states within its historic range, including Tennessee, North Carolina, Kentucky, Georgia and Ohio. Anglers in these states are required by law to immediately release all sturgeon.

Lake sturgeon were regarded as trash fish until the mid-19th century, when the fishing industry realized the value of the sturgeon’s eggs as caviar. At the time, the caviar industry was young and extremely profitable, so there were no regulations to speak of and boats harvested unsustainable numbers of fish. This vigorous overfishing continued for around a hundred years and it was a major factor in the collapse of sturgeon populations.

All waterways in the United States were closed to commercial sturgeon fishing by the 1970s. By that time, the Tennessee Valley Authority had built dams throughout the South, including on the Tennessee River and its tributaries, and these obstructions prevented the sturgeon from reaching their spawning grounds. With their populations decimated and their migration routes blocked off, the lake sturgeon that inhabited the Tennessee River watershed were headed towards extinction until restoration efforts began in 1995.

The first hatchery fish were released into the Tennessee River in 2000. Since then, the group has stocked approximately 150,000 fingerlings — juvenile sturgeon — in the Upper Tennessee and its tributaries, including the Clinch, Holston and French Broad rivers.

Wilson monitors the fish with the help of Christina Saidak, a graduate student at the University of Tennessee who has implanted acoustic telemetry transmitters in 49 sturgeon. Saidak says that “we are seeing both upstream and downstream movement of fish, and we have seen positive weight and growth patterns similar to the weight and growth patterns of lake sturgeon elsewhere in their home range.”

A lake sturgeon at the Toledo Zoo searches for food along the bottom of the aquarium. Photo by Flickr user Crow911.

The ultimate goal of the project is to restore a self-sustaining population of lake sturgeon to the Tennessee River watershed, but this could take years — even decades — since the species takes an unusually long time to reach sexual maturity. Females might not produce eggs until their twentieth year, which is still five years away for even the first reintroduced sturgeon. But Saidak has reasons to be optimistic: “We have identified potential spawning and staging areas through direct observation and reports collected from local fishermen. Within the next ten years or so, we hope to see some [evidence of spawning sturgeon].”

Because they have to migrate long distances in order to spawn, sometimes swimming hundreds of miles, the lake sturgeon’s ability to procreate in the Tennessee River watershed depends entirely on whether or not they can successfully navigate a complex system of dams. Those without locks, like Cherokee Dam on the Holston and Douglas Dam on the French Broad, are dead ends for migrating sturgeon.

All nine dams on the main stem of the Tennessee, however, have navigational locks, and the locks at many of these dams are now being held open during certain times of the year in order to enhance the potential for migratory fish to move through. “Thirty years ago, nobody thought about it or cared about it,” says Dr. Wilson, “but biologists are now making water control officials aware of spawning patterns of different fish and their movements, so there is quite a bit of coordination between the two.”

The restoration efforts of the Tennessee River Lake Sturgeon Working Group are contingent upon the cooperation of water control officials with fishery biologists and a continued moratorium on commercial fishing. If these conditions are met, the primitive lake sturgeon might once again thrive in the Tennessee River.