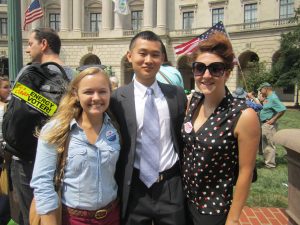 Last Tuesday, on the first day of the carbon rule hearings at the U.S. Environmental Protection Agency’s headquarters in Washington, D.C., I stepped off the Metro full of anticipation for my first-ever public rally for any cause, let alone an environmental one.

I arrived at the Federal Triangle station slightly overwhelmed by the unfamiliar surroundings but, following the sounds of live music to the front of the building, I knew upon first glance that I had found my destination.

On the wide semi-circular lawn, children ran with toy replicas of wind turbines. People of many ethnicities and a range of ages stood chatting and putting the finishing touches on colorful posters. A woman and a young musician led a call-and-response demanding “Clean Energy Now.” And on the street, volunteers handed out Ben & Jerry’s ice cream.

I accepted a Moms Clean Air Force sticker from a helpful volunteer and hunted for more free items to show my support. Meanwhile, inside EPA headquarters, Hannah Wiegard and Jeff Feng from Appalachian Voices presented their testimony on the dangers of mountaintop removal coal mining and the need to take swift action to combat climate change.

Proudly sporting my “I Love Mountains” button, I was ready to hobnob with other Americans advocating for clean energy and climate action including lawyers, career environmental advocates, interns like me, and citizens who traveled great distances to appear before the EPA and raise their voices in support of cutting carbon pollution.

These are the people I surround myself with at home and at school, but I’ve often felt like somewhat of an imposter in their presence. I can’t talk knowledgeably about “carbon capture and sequestration” like they can. I waste far too much water, paper, gas, food and electricity. And this was my first-ever environmental rally. In these kinds of situations, my insecurities tend to build inside me like guilt and create a sense of otherness in my mind between myself and the people I admire and want to emulate.

But that morning, I felt immediately welcomed into the fold because just being there meant that I was contributing to the cause. Building grassroots support and demonstrating the power of people mark the beginnings of social and legislative change, as rally speakers such as Green Latino President Mark Magaña and the Rev. Lennox Yearwood of the Hip Hop Caucus impressed upon the crowd.

For me, catching the spirit and optimism of the rally has given greater clarity to both a collective vision of a clean energy future and what I can do as an individual to help us get there. It’s one thing to wear the pins and stickers; it’s another thing to feel empowered by your peers to take action and work toward a common goal. This sense of belonging is the most valuable thing I’ll take with me from the rally. The free sunglasses are pretty cool, too.