Blasting mountains apart sends heavy metals and particulate matter into the air, putting people at risk. So why did the Obama administration pull the plug on research into mountaintop removal’s health impacts?

There are over 20 peer-reviewed scientific studies demonstrating a link between mountaintop removal coal mining in Appalachia and severe health impacts. Dozens of researchers have found correlations between proximity to mountaintop removal mines and elevated rates of cancer, birth defects, and respiratory and cardiovascular illnesses.

For those of you paying attention to the issue, none of this is news.

What should have been news was a groundbreaking study from the U.S. Geological Survey showing a causal link between mountaintop removal mining activities and specific types of air pollution which are causing some of these health problems. USGS researchers had been working on collecting data for the past two years, and according to USGS chemist Bill Orem, the “data is pretty startling.” According to Orem, the data is “compelling enough that a more targeted health study needs to be conducted in these areas.” 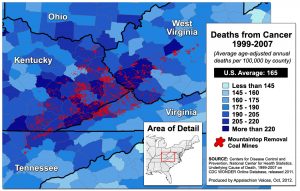 One of more than 20 previous studies shows people living near the destruction are 50% more likely to die of cancer.

You could make the argument that the new study was largely unnecessary. Between the existing health studies and water impact studies, the administration would be entirely justified in placing an immediate moratorium on issuing new mountaintop removal mining permits. But since the administration has not had the spine to take strong actions yet, we need more tools to pressure them to do the right thing. The USGS research would have been an amazing tool for that purpose.

When President Obama first took office, he made a commitment that his agencies would always act on what the science dictated. I guess the way around taking actions, then, is to stop the science from ever being completed.

There’s a MoveOn.org petition asking the president to restore the funding for the research. Please sign and share.