When FirstEnergy Corporation announced plans last year to close Little Blue Run coal ash pond, a 1,700-acre unlined basin that sits along the banks of the Ohio River, nearby residents were understandably relieved. 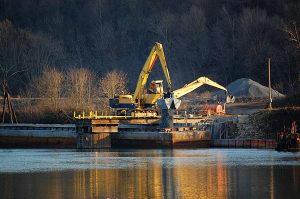 Coal ash is placed at a minefill site on the banks of the Monongahela River, a public drinking water source, in LaBelle, Pa. Photo by Lisa Graves-Marcucci, courtesy of Citizens Coal Council

But not everyone was celebrating.

The coal ash still has to go somewhere, and the Bruce Mansfield coal plant in Shippingport, Pa. — the largest coal plant in the state and the facility that sends much of its waste to Little Blue Run — produces approximately 3.4 million tons of ash each year.

So in January 2013, after initially seeking permits to build a second impoundment near Little Blue Run, FirstEnergy announced it had found a “beneficial use” for coal ash from the plant: as fill material at an abandoned strip mine that now operates as a coal waste dump, or “minefill” site.

If FirstEnergy gets its way, beginning on January 1, 2017, coal ash from the plant will be dried, loaded on barges, and floated up the Monongahela and Ohio rivers to a minefill in LaBelle, Pa., that D.C.-based Public Justice Foundation calls “really just another unlined dump.”

The coal and electric utility industries tout coal ash minefilling as efficient and affordable. The rules regulating it are scant — accommodating even — and it cuts costs for companies that mine the coal, and those that burn it. But communities near minefills are burdened by air pollution and the constant threat of water contamination.

Like coal ash stored near waterways, ash used as fill material can contaminate ground and surface waters with harmful levels of arsenic, selenium, mercury and other toxins. Minefill sites also pollute the air. Wind and workers moving the dry ash release harmful particulate matter that blows into nearby communities like LaBelle.

“I’m concerned that we’re transferring the risks from one community to another,” Lisa Graves-Marcucci, an organizer with Environmental Integrity Project, told the Ohio Morning Journal News last year in response to FirstEnergy’s plan.

In states including Pennsylvania, Ohio and West Virginia, minefill projects cannot receive permits unless a beneficial use for the coal ash is demonstrated. Agencies in charge of permitting often promote the practice, claiming it lessens the chance of contamination from acid mine drainage and increases soil fertility. Critics are skeptical of those claims and worry that the risks to air and water quality outweigh any perceived benefit.

In response to a request from Congress, the National Research Council released a study in 2006 that examined the health, safety and environmental risks of minefilling and concluded that federal standards are needed to ensure that states enforce adequate safeguards. A year later, the federal Office of Surface Mining Reclamation and Enforcement announced plans to craft a rule regulating minefills.

But the process has been slow, complicated by the overlap with the U.S. Environmental Protection Agency’s rule-making on coal ash, and OSM has yet to issue a proposal. Until it does, the decision of whether minefilling is a benefit or a burden will be left in the hands of the states.