Like a “good neighbor,” the Supreme Court is there

Yesterday, the U.S. Supreme Court handed a significant win to the U.S. Environmental Protection Agency when it revived an EPA rule aimed at reducing air pollution that travels across state lines.

The Cross-State Air Pollution Rule (CSAPR) was created under the Clean Air Act’s “good neighbor” provision to address air pollutants including sulfur dioxide, nitrogen oxide, and mercury that blow from upwind states, harming the health of those downwind and making it harder for certain states to meet Clean Air Act requirements.

Under CSAPR, the EPA created an annual emissions budget for upwind states, and put a limit on the amount of pollution each in-state source can emit.

The rule applies to the eastern half of the U.S. and has pitted many of those 28 states against a handful in the Northeast that are most susceptible to air pollution from upwind states. As Sen. Ed Markey of Massachusetts said in a statement, “Pollution does not respect state borders or know the difference between lungs in the Midwest or lungs in New England.” 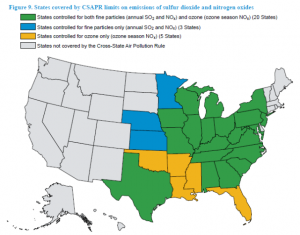 The Cross-State Air Pollution Rule applies to 28 states. Many of the largest polluters sued the EPA over the rule in 2012. Graphic by the Center for Environment, Commerce & Energy. Click to enlarge.

Pollutants targeted by CSAPR contribute to asthma, lung disease and premature death. According to the EPA, the rule will prevent up to 34,000 premature deaths, hundreds of thousand of asthma attacks and 19,000 emergency department visits.

In its reaction to the ruling, the Natural Resources Defense Council called CSAPR “one of the most significant health standards ever adopted by the Environmental Protection Agency.”

Air pollution is transient, heedless of state boundaries. Pollutants generated by upwind sources are often transported by air currents, sometimes over hundreds of miles, to downwind states. As the pollution travels out of state, upwind states are relieved of the associated costs. Those costs are borne instead by the downwind states, whose ability to achieve and maintain satisfactory air quality is hampered by the steady stream of infiltrating pollution.

The rule doesn’t apply to greenhouse gases. But, as Coral Davenport of the New York Times points out, the ruling could impact how impending rules to regulate carbon pollution fair in the courts:

“The 6-to-2 ruling bolsters the centerpiece of President Obama’s environmental agenda: a series of new regulations aimed at cutting pollution from coal-fired power plants. Republicans and the coal industry have criticized the regulations, which use the Clean Air Act as their legal authority, as a ‘war on coal.’ The industry has waged an aggressive legal battle to undo the rules.

The CSAPR has been tossed between courts since it was finalized in July 2011. In February 2012, power companies and 14 states — including six of the 10 highest-polluting states in the U.S. — sued the EPA.

Later that year, the EPA appealed a ruling that struck down CSAPR and asked the Supreme Court to chime in on whether the agency had in fact overstepped its authority. This week’s ruling reverses that decision.

It will likely be 2016 before the rule is implemented, and, if the EPA makes adjustments, CSAPR could go back to court and delayed even further.

Earlier this month, a federal appeals court upheld the EPA’s Mercury and Air Toxics Standards (MATS). Because of that more stringent rule, its overlap with CSAPR and the fact that it will likely go into effect in April 2015, analysts predict CSAPR will have a “very limited impact” on whether utilities retire coal plants that weren’t already on the chopping block.