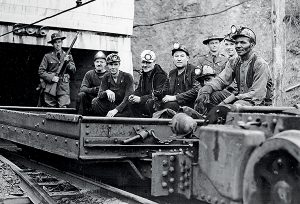 The coal boom drew a mix of European immigrants and African Americans to work in Appalachia. Photo courtesy of University of Kentucky Libraries, Harlan County Mine Strike Photographic Collection, 1939

The United States may be thought of as the good ol’ “Red, White, and Blue,” but in the minds of many, Appalachian America is simply “white, white, white” — racially, that is. The stereotype of Appalachia as a strictly white Anglo-Saxon region has been perpetuated by journalists, novelists, social scientists, and even many regional historians. Yet this generalization over-simplifies a more complicated — and more colorful — reality.

Appalachia is not a homogenous region today, and, even historically, diversity has always been present. Prior to the arrival of Europeans in the 16th century, Appalachia was home to thousands of Native Americans, mostly Cherokee. Following their forcible removal via the 1838 Trail of Tears, around 1,400 natives remained in the mountains, forming the core of the Eastern Band of Cherokee Indians.

At the same time that the natives were being forced out, Africans were being forced in. By 1860, people of African descent made up between 10 and 15 percent of the region’s population. These slaves brought with them the akonting and ngoni, precursors to the five-string banjo. The combination of African-American blues with other musical imports formed what would become one of the region’s most popular exports: modern-day country and bluegrass music.

Invariably, the commingling of cultures led to intermarriages that created ethnic and racial combinations new to the region. Even as diversity increased, racist laws supported a climate of white superiority while facilitating the disenfranchisement of non-whites, who were clumped into a category then dubbed “coloreds.” This term was used to signify Native Americans, Africans and even Irish immigrants upon their initial arrival.

Other European immigrants were lured to the area by the first major coal boom at the end of the 19th century. As demand for miners increased, coal operators began to look outside the region for more workers; they particularly targeted eastern and southern European immigrants. Between 1820 and 1920, more than 60,000 Italians, Hungarians, Austrians, Russians, Poles and other immigrant workers had settled in the Appalachian coalfields, constituting as much as 40 percent of the workforce. African Americans from further south were also drawn to the mines and surrounding timber camps, creating a melting pot of diversity in central Appalachia.

Yet, the jobs that initially drew these newcomers to America and to the region did not last. The coal slump of the 1920s and the Great Depression of the 1930s led to widespread unemployment, with vast numbers of workers leaving for northern industrial cities, reducing both Appalachia’s population and diversity. By 1990, minorities made up only 9 percent of Appalachia’s total population, with African Americans comprising the vast majority of this subgroup.

Diversity on the Rise

During the past three decades, however, diversity has been increasing throughout the region, particularly in urban areas and university towns. In the 1990s, racial and ethnic minorities accounted for nearly half the region’s population growth, while the Latino population increased by nearly 240 percent. West Virginia alone welcomed new residents from 31 different countries during that time period. Many of these newcomers were drawn to the region for work in specific industries, including poultry processing in East Tennessee, Christmas tree farming in western North Carolina and horse farms in West Virginia. By 2010, minorities accounted for more than 16 percent of the region’s population.

Despite the influx of such newcomers, minority population rates in Appalachia remain well below the national average. Yet, contemporary Appalachia is undeniably a much more multicultural place today than it was even thirty years ago, a fact that is gaining wider recognition among artists, academics and leaders of nonprofits, if not yet the general American public. Today, Heifer International’s Blue Ridge Seeds of Change initiative supports the growing number of Latino food producers in Appalachian North Carolina, while the Affrilachian Artist Project chronicles the experience of African Americans across the region.

Even the federal government has come to embrace a broader understanding of the region’s demographics; in response to a petition filed by Appalachian scholar Fred Hay in 2005, the Library of Congress officially changed its Subject Heading that referred to the people of Appalachia as “Mountain Whites” to “Appalachians (People).” This seemingly minor triumph indicates a much greater one — Appalachia’s long-whitewashed image is finally being colored in to reveal a more nuanced, accurate portrait of the region and its history.