When I first heard about the chemical spill in Charleston, W.Va., on the morning of Jan. 9, I emailed the rest of the Appalachian Voices staff and immediately started packing an overnight bag. While I didn’t exactly know what I would be doing once I reached West Virginia — or much about what exactly had happened — I knew I might be there for several days.

Information flooded in from news reports and our friends in West Virginia. A substantial but unknown quantity of Crude MCHM — a chemical used to wash coal — had leaked into the Elk River from a decades-old tank at Freedom Industries, a chemical storage facility. The spill occurred just a mile and a half upstream from a West Virginia American Water drinking water intake that serves more than 300,000 people. A state of emergency was declared and West Virginia American Water customers in nine counties were instructed to only use their water for flushing toilets and extinguishing fires. 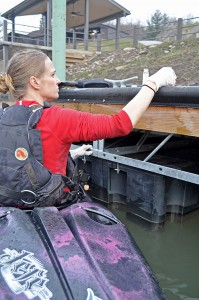 Erin Savage of Appalachian Voices collects a water sample from the Elk River downstream from the spill site on Jan. 10. Photo by Eric Chance

Since our experience with the coal industry has taught us not to trust a company’s self-reported pollution monitoring, I drove to the spill site with the Appalachian Water Watch team to join local groups in collecting independent water samples. Rob Goodwin of the West Virginia organization Coal River Mountain Watch was waiting for us on the banks of the Elk River, where we immediately noticed the distinct licorice-like smell that first alerted nearby residents to the presence of the MCHM. A low fog hung over the river, which might have been unremarkable if not for its strange blue tint.

Along with Goodwin and others, we first paddled downstream to the drinking water intake, and then upstream to just below the spill site, taking samples in both locations. Fumes filled the air as we carefully tried to limit direct contact with the water.

Freedom Industries originally reported a leak of 5,000 gallons, but revised the figure to 7,500 gallons and increased it again to 10,000 by late January. Although the Centers for Disease Control and Prevention initially recommended a safety level of one part-per-million of MCHM, they later advised pregnant women to not drink the water even at the 1 ppm level.

Then, 12 days after the spill — and after the water company had lifted the “do not use” order — Freedom Industries disclosed the presence of PPH, a second chemical. By Jan. 24, the chair of the federal Chemical Safety Board commented that Crude MCHM and PPH should not be in drinking water at any level.

I returned to West Virginia the week after the spill to join several others from local nonprofits and universities taking tap water samples in homes and churches. In some locations the water ban had been lifted, while in others water use was still prohibited. Although West Virginia American Water assured residents that their water would be safe after flushing — a long, laborious process that can involve draining hot water tanks and changing filters — the people I spoke with didn’t trust the company’s claims and continued to drink and cook with bottled water. In some homes, the licorice smell remained even after flushing — though it was hard to tell if it was because the flushing had not worked, or because the chemical was just now reaching their home.

Some residents reluctantly started showering with tap water, but others drove to the homes of unaffected friends and relatives. I met families struggling to keep up with household chores — laundry and dishes piled up, especially for families with young children. And while many officials were treating the problem as solved, residents were having ongoing physical reactions to their water.

As with most of the more than 84,000 chemicals used in commerce today, little is known about the toxicity and risks associated with Crude MCHM, the primary chemical in the spill. It’s unclear when — or if — pipes and hot-water heaters will be rid of chemical residue, and it’s uncertain whether MCHM is breaking down into the cancer-causing agent formaldehyde or other toxic materials. Hundreds of West Virginians have gone to the doctor with skin and eye irritation and respiratory ailments, while many others are dealing with headaches and rashes at home. The long-term health impacts are unknown.

Four weeks after the event, affected citizens continue to contact our Appalachian Water Watch water pollution hotline and website with reports of health complications from exposure and the lingering smell of Crude MCHM coming from their taps. One report indicated that children in the household had experienced a rash after coming in contact with the water on Jan. 7 — two days before the spill was reported. All callers continue to express uncertainty about the safety of their tap water. 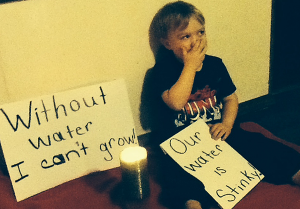 I struggle with what to tell people whose water we tested. Even when the results are clear, I can’t be sure that the chemicals won’t work through miles of water lines and show up at their houses later. Inevitably, the highest burden of this risk falls on those who cannot afford to move or to continue purchasing bottled water.

Seeking answers, some concerned citizens attended a town hall meeting hosted by a local TV station, while others gathered at the state capitol to protest. On Jan. 30, more than 20 days after the spill, Gov. Earl Ray Tomblin noted that he had requested additional help from the Federal Emergency Management Agency, and also asked West Virginia American Water to continue supplying affected areas with bottled water. “Despite the best efforts of the company and government,” he wrote to FEMA, “many people no longer view their tap water as safe and are continuing to demand bottled water to meet their potable water needs. It is impossible to predict when this will change, if ever.”

As the aftermath of the spill continues to unfold, neighbors who may not have originally seen eye-to-eye on environmental issues are beginning to talk. Residents are banding together to form new grassroots networks such as the WV Clean Water Hub, and citizens from all throughout Appalachia and beyond are pitching in to help local nonprofits continue to provide water. Although the path ahead is still littered with unknowns, the conversation is reaching a fever pitch as communities in West Virginia — and beyond — stand together to defend the right to clean water.

Erin Savage is a water quality specialist with Appalachian Voices, the publisher of The Appalachian Voice. She and Eric Chance manage the water pollution alert website appalachianwaterwatch.org and hotline 1-855-7WATERS