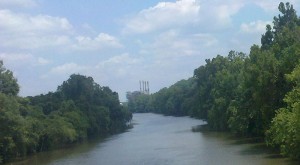 The Dan River runs black: Initial indications estimate as much as 82,000 tons of coal ash could already be in the Dan River. Appalachian Voices and our allies are demanding accountability and full disclosure from Duke Energy and the N.C. Department of Environment and Natural Resources.

Asheville, N.C. — Upon receiving news of a new coal ash disaster in North Carolina, concerned community and environmental organizations call upon Duke Energy and the North Carolina Department of Environment and Natural Resources to immediately notify the public of the severity of the disaster. Groups cite the recent West Virginia chemical spill as evidence for the need for immediate and full disclosure on the part of the responsible party.

Initial indications are that 22 million gallons of coal ash could already be in the Dan River headed toward the downstream communities of Eden and Danville. Eyewitness sightings claimed the Dan River was “running black” earlier today in Eden. For comparison, the Kingston Tennessee Valley Authority disaster dumped over 1 billion gallons of coal ash into the Clinch and Emory Rivers five years ago.

Both of the Dan River coal ash impoundments are unlined and carry a high hazard rating from the EPA, meaning a dam failure would cause damage to local communities and infrastructure and likely cause loss of life. Coal ash waste reads like a “who’s who list” of toxic heavy metals. From arsenic, boron, and chromium to selenium, mercury and lead, coal ash is a serious threat to aquatic ecosystems and local drinking water.

The spill comes just days after millions of gallons of sewage spilled into North Carolina’s Haw River, and state environmental officials failed to notify the public within the 48 hours that the law requires.

Duke Energy is currently in litigation for alleged pollution at all 14 coal ash dump sites in North Carolina. The utility has repeatedly claimed that its coal ash storage facilities are safe and comply with environmental protection laws. Groups have continued to call on Duke Energy to address legacy issues of toxic coal ash to ensure proper long-term storage of the hazardous waste upon closure of any coal plant.

“Based on our experiences with the Kingston dam break, we know that toxic coal ash dumped into waters is an environmental disaster that requires swift attention and cleanup,” stated Ulla Reeves, High Risk Energy Program Director with the Southern Alliance for Clean Energy. “Downstream communities’ drinking water could be at risk and residents need to be forewarned immediately.”

“State environmental officials failed to immediately notify the public about a major toxic spill in one of our precious waterways,” said Stephanie Schweickert, affiliate organizer with the North Carolina Conservation Network. “Coal ash is extremely dangerous and the communities near the spill deserve information about their health and safety.”

“The Dan River Basin Association has a full time staff person in Rockingham County dedicated to the protection and promotion of the natural and cultural resources here. We are very concerned about the potential impact this spill will have on drinking water and the outdoor recreational economy, “says Tiffany Haworth, Executive Director of the Dan River Basin Association. “We have worked hard with community members to assure that our local rivers are clean and here for future generations, and we will continue to do so until this matter is resolved.”

“Five days after I sampled the river after the Kingston coal ash spill, I found arsenic, lead, chromium and other metals were 2 to 300 times higher than drinking water standards and the plume of coal ash stretched more than 20 miles,” said Donna Lisenby, Global Coal Campaign Coordinator for Waterkeeper Alliance. “The Dan River spill happened on Sunday and Duke Energy still has not reported the results of any water quality tests-this is unacceptable. Downstream communities need to know what pollutants Duke dumped into the Dan River.”