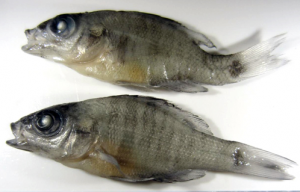 Coal ash, the toxic waste produced by coal-fired power plants continues to plague communities across the country. A new study, conducted by Dr. Dennis Lemly, research associate professor of Biology at Wake Forest University and a leading expert on selenium poisoning, found that selenium from coal ash discharges into Sutton Lake near Wilmington, N.C., is killing more than 900,000 fish each year and causing deformities in thousands more.

The study was commissioned by the Southern Environmental Law Center to document the biological damage that coal ash waste from Duke Energy’s coal-fired power plants are inflicting on North Carolina’s aquatic ecosystems.

Although Sutton Lake is a public fishery that many members of the community rely on for recreational and even subsistence fishing, Duke Energy and the North Carolina Department of Environment and Natural Resources have allowed selenium contamination from coal ash ponds to continue unabated for years. Selenium, a documented contaminant of coal ash, can cause health concerns for fish and people.

The study analyzed more than 1,400 fish in Sutton Lake, and found significant deformities of the heads, mouths, spines and tails, indicating selenium poisoning. Many fish with these deformities die at a young age and fish that appear normal may not be able to reproduce. The study found that the population of catchable bass alone has decreased by 50 percent since 2008. Citizens who rely on the lake for fish are finding fewer to catch, and what they do find may be unsafe for human consumption. Low levels of selenium can cause nervous system problems, brittle hair and deformed nails in humans while chronic, long-term exposure to selenium can cause liver, kidney and nervous system damage.

This is not the first time that selenium has caused widespread damage to North Carolina’s fish populations. Coal ash discharges into Belews Lake from the Belews Creek Steam Station near Winston Salem caused severe selenium poisoning in the late 1970s. Seventeen of the twenty fish species in the lake were completely wiped out and two of the other species were rendered sterile. Although Duke Energy stopped discharging wastewater into Belews Lake in 1986, selenium still persists in the sediment of the lake and continues to move throughout the food chain.

According to Dr. Lemly, “Belews Lake provides an excellent case study of the insidious and persistent toxicity of selenium to aquatic ecosystems.” And yet, despite Duke’s knowledge of the risks posed by selenium, the company is allowing history to repeat itself at Sutton Lake. Although the study shows obvious damage to the fish population, Duke Energy still refuses to stop discharging into the lake. Even if the company stopped today, Lemly estimates that it would take almost 50 years for selenium in Sutton Lake to reach harmless levels again.

While aquatic ecosystems continue to suffer from coal ash pollution, concerned citizens, groups like Appalachian Voices and others continue to work for stronger regulations at the state and federal level. Currently, Duke is involved in lawsuits alleging coal ash pollution at all 14 of its coal-fired plants. With the intervention of the Southern Environmental Law Center in the Sutton Lake case, we hope that Duke will be forced to clean up its toxic waste, including the discharges laden with selenium. Additionally, the Environmental Protection Agency has been ordered by a federal court to come up with a schedule for long-awaited coal ash regulations by the end of December. We hope that the EPA’s federal regulations, which will replace the decades-old outdated standards that allow coal ash to contaminate water systems with toxic chemicals will be strong enough to force companies like Duke to finally take action to clean-up their coal ash pollution.