Ken Hechler: An Epoch of Activism 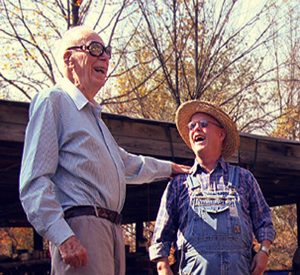 For the vast majority of his nearly 100 years, Ken Hechler has been one of the mountains’ strongest advocates. A Democrat from West Virginia, Ken Hechler served in the U.S. House of Representatives for 18 straight years, beginning in 1958. During this time, Hechler championed the abolition of strip mining and fought for more stringent safety laws in coal mines, leading to the passage of the Federal Coal Mine Health and Safety Act of 1969. Hechler also served as West Virginia Secretary of State from 1985-2001.

Hechler’s commitment to environmental justice has never wavered. In 2009, at 94 years old, Hechler was arrested at a mountaintop removal coal mining protest, and in 2010, he ran for Congress solely to raise awareness of the practice. Throughout his years of public service, Hechler has remained a man of abiding principles, though according to him his tactics have changed. In a 2009 commentary in the Charleston Gazette, Hechler described his journey succinctly: “I used to be an agitator, then an activist. Now I am a hellraiser.”