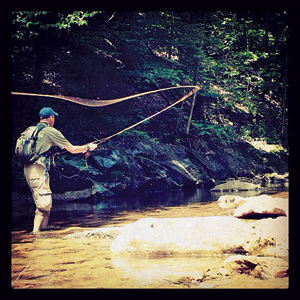 Fly fishing on the Cranberry River, one of the premier trout streams that would be protected by the new monument. Photo courtesy of Philip Smith

The Birthplace of Rivers is an area in the Monongahela National Forest of West Virginia known for its preserved wildlife and ecological features. It includes some of West Virginia’s tallest waterfalls and cleanest waterways, and is considered one of the largest expanses of wild forest in the eastern part of the country. And now, it may also become a national monument.

The citizen-initiated project called Birthplace of Rivers National Monument is currently in the concept development stage, but has support from environmental, outdoor sports and religious organizations as well as businesses in the state, says Michael Costello, the executive director of the West Virginia Wilderness Coalition.

“Right now, we’re working through a collaboration process of what we want it to look like,” Costello says.

Once built, the monument will have to be approved by a presidential proclamation or Congress to become official. If approved, Birthplace of Rivers would be the first national monument in West Virginia.

“Although the designation is made at a federal level, it is very important that we develop a collaborative proposal on a local and statewide level, so West Virginians can define what the monument looks like, making sure the management of the area fits the landscape’s place-specific needs and allows continued access for our important outdoor traditions,” Costello wrote in an email.

The new monument would protect six rivers and pay homage to West Virginia’s diverse wildlife, scenic views, local recreation and the culture of the area.

The goal is to turn the monument into a backcountry area. This is similar to a wilderness area in terms of preservation, Costello says, but more activities for the public, such as mountain biking, are allowed.

The organizations involved are funding the project and hope to have a finalized proposal ready soon, but have not set a timeline for completion.

“It’s much more important to us to develop a consensus-based, viable proposal than it is to accomplish the designation by a specific deadline,” Costello says.

Citizens interested in working with the initiative can volunteer at birthplaceofrivers.org.