Williamson, W.Va.­ – A Gateway to Sustainability in Central Appalachia 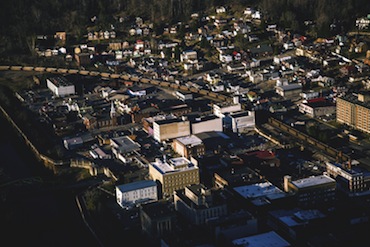 The Coal House, built in 1933 from its namesake rock, sits in downtown Williamson, W.Va., in the heart of Appalachia’s coal mining region. It is home to the Tug County Chamber of Commerce.

Next door, construction of a high-tech “smart office” is underway in the lobby of the historic Mountaineer Hotel. The office will function as an incubator for sustainable design and construction projects in the region.

The incongruity of the buildings, one grounded in the past and the other looking to the future, encompasses the vision of Sustainable Williamson: to create replicable models of sustainability for economically distressed communities throughout Central Appalachia.

“Whether we’re recruiting renewable energy businesses, organizing farmers’ markets or developing 5K events through the local diabetes coalition, our goals for Sustainable Williamson are to diversify the region’s economy and build a healthier community,” says Darrin McCormick, mayor of Williamson.

Williamson is in a region with one of the nation’s highest early death rates, where childhood obesity is rampant and more than 30 percent of the residents live below the poverty line. Sustainable Williamson — a non-profit formed in 2010 by the city’s redevelopment authority — hopes to turn the tide by creating job opportunities, building sustainable community infrastructure and promoting health care initiatives. Projects include construction of a multi-million dollar community health center, upgrading school nutrition programs, plans for a recreation complex that will support local tourism, and career training for renewable-energy businesses such as the solar energy company in town.

“The smart office will play an important role in this effort,” says Eric Mathis, a Sustainable Williamson organizer and commissioner with the Williamson Redevelopment Authority. “The symbolic relationship between the house made of coal and the futuristic smart office is about friends working together in both buildings to create a healthy future for all.”

For more information, or to contribute to the smart office’s capital campaign, visit: sustainablewilliamson.org.