Appalachia and migrating birds serve each other in multiple ways 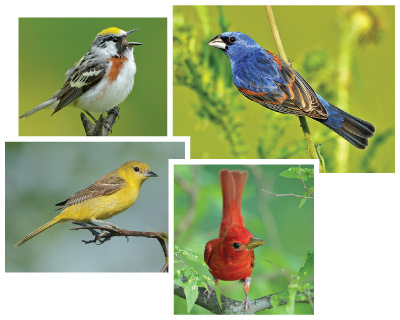 Every fall and spring, an ongoing restlessness called zugenruhe begins to make some birds’ wings twitch at night. They will gorge on seeds and insects, fattening their bodies by as much as 10 percent per day. Solitary birds will even flock together for better predator avoidance, food finding and orientation for the long journey ahead.

It’s all part of migration.

Propelled by genetics that go back to the ice age, and fostered by a series of individual and group choices, migration is equal parts odyssey and mundanity, an age-old rite of daily life. Despite abundant research, the journey remains a mysterious process and is highly variable between species, representing in some ways the amorphous hardiness of the world’s most mobile creatures.

There are 10 to 20 billion birds in the United States. Every year, more than five billion of them, representing about 350 species, will jet off for a difficult journey that will bring better food and eventual offspring, while killing off untold numbers from weather, exhaustion and natural predation.

Human-made obstacles are proving increasingly fatal, however, causing billions of mortalities every year, and the wellbeing of migratory birds becomes a question for the Appalachian wilderness, a well-noted migratory flyway. Can the mountains maintain safe passage and healthy lives for traveling birds, or will humankind block their journey?

Cerulean warblers may be rare, but at least they’re loud, trilling a tattoo of notes before their song’s crescendo. Melinda Welton, research associate with the Gulf Coast Bird Observatory, expected to hear their chorus when she drove to West Virginia for a bird survey.

What she found instead was mountaintop removal coal mining, valley fills and reclaimed pastures: a relative silence.

Over the past fifty years, the cerulean warbler’s population in the United States has declined by more than 70 percent. Of the eastern songbirds, no bird has experienced a steeper loss.

Of the migratory birds, none has become a more potent symbol for habitat loss. While their North American breeding habitat, mature hardwood forests with structurally diverse canopies, is fragmented through improper timber management and coal mining, their wintering habitat in South America is overtaken by pastureland, coca farms and sun-grown coffee plantations.

There’s not a quick solution to the warbler’s plight. According to Welton, the birds thrive mostly in forests where no human interference has taken place, meaning reforested timber land and reclamation projects may take 30 or 40 years to be suitable for lasting warbler populations.

Researchers often cite the Cumberland Mountains, which stretch from West Virginia to Tennessee, as the best breeding habitat for the bird, says Welton. Protecting this breeding territory, with the help of wildlife agencies and nature conservancies, will be crucial to the bird’s survival.

“I don’t know that you can track human welfare to the existence of cerulean warblers,” says Welton, “but if [their habitat] goes, then we can’t predict what else we lose.”

It’s a big question, how the Appalachian mountains serve migratory species. Andrew Farnsworth, a research associate with the Cornell Lab of Ornithology, thinks it boils down to two basic functions.

First, the region provides a rich habitat. Appalachian streams burst with edible insects and sport a surplus of nestable trees, and when undisturbed, they support breeding species such as scarlet tanagers, wood thrushes and Kentucky warblers. And because there are so many resources available, says Farnsworth, there’s good evidence that some birds use the southern terminus of the Appalachians as stopover ground, pecking up precious foodstuffs on their way to and from the tropics.

The ridgelines of the mountains provide the second function. They guide raptors such as eagles, hawks and vultures as they fly south. Nocturnal migrants such as songbirds use the ridges, too, but evidence of their flights is less clear.

The raptors are auspicious as they take advantage of the sun-filled topography. Conserving precious energy, they circle upward on masses of hot air called thermals. When a thermal dissipates, sometimes at altitudes greater than 3,000 feet, they glide off into the next thermal to repeat the process. With this method, they often cover 250 to 300 miles each day with minimal flapping. Winds that meet the ridges also cause updrafts, which sometimes throw these fast-gliding raptors on a collision course with human-made projects such as wind turbines.

According to the American Bird Conservancy, up to 440,000 birds were killed by wind turbines in 2010. These fatalities comprise less than one percent of the whole, however. Larger mortalities arise from window collisions (up to one billion each year), pesticides (at least 72 million annually), and cats (up to 3.7 billion birds).

Smart engineering designs for windmills, lights and other structures, combined with educational campaigns such as the American Bird Conservancy’s “Cat Indoors!” program, have helped to mitigate these avian losses in recent years. Yet modernization and human expansion is still taking a toll on the birds.

Habitat loss and climate change pose serious threats to migratory birds, Farnsworth says. These, when compounded with the rest of human-caused mortalities, make for a serious situation.
With climate change, some will be better off. For species such as the eastern phoebe or tree swallow — which have larger, more mobile populations and extensive ranges — things may not be so dire. Other species that rely on specific habitats and seasonal food sources in and out of migration, such as the barn swallow or the canvasback duck, will have a harder time adjusting.

The birds’ timing and presence — or absence — around the nation is becoming a point of interest for ornithologists and birdwatchers alike. Recent studies have shown migration timing to have shifted by more than 20 days for some species, while ranges have shifted as well, prompting birds such as the golden-winged warbler to have moved nearly 100 miles north in the past two decades. 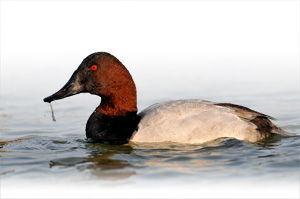 Canvasback ducks migrate in “V” formation, creating air vortices with their wingtips that ease the flight weight of each successive duck. This reduces drag by 65 percent and increases the ducks’ range by as much as 70 percent. Photo by Ed Schneider.

eBird, from Cornell University and the National Audubon Society, might be the best evidence for that. The project, now 10 years old with over 100 million observations, engages volunteers from around the world to enter their observations into an online database.

eBird data has been used for studies on biodiversity and climate change, and Cornell has used the project to mobilize birdwatchers in the wake of disasters such as the Deepwater Horizon oil spill.
With birders examining the coast periodically, ecologists, conservationists and scientists can examine bird populations and extrapolate real costs of environmental losses.

Another Cornell-collaborated project called Birdcast attempts to tell the future. Taking what is known from meteorological data and using radar and acoustics to track birds, it merges everything together to predict where, when, how many and what kind of birds are going to travel. Researchers hope to automate the avian models produced from this data, and use it in ways like the modern weatherman, to predict and recall the turbulent feathered migrations.

Bird is the Word 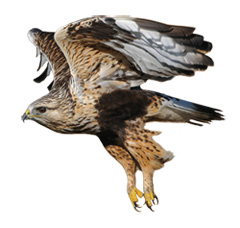 Rough-legged hawks winter in northern and central Appalachia, and breed in the Arctic tundra. Like bald eagles, this hawk’s southward movements depend to a large degree on habitat and prey conditions at the northern latitudes, which may be at risk of climate change in coming years. Photo by Ed Schneider.

According to a U.S. Fish and Wildlife Service report, there were about 48 million birdwatchers in the United States in 2006. They were estimated to have generated about $82 billion in economic output while creating 671,000 jobs nationwide.

It’s among the nation’s fastest growing hobbies, and even without its economic impact, its educational and social benefits are felt. Simon Thompson, bird guide and owner of the store Wild Bird Unlimited out of Asheville, N.C., says over the past two years he and other local birders took part in a “fiercely competitive” bird-a-thon that raised over $14,000 for cerulean warbler habitat.

Thompson describes the beauty of birding, not only by sight, but by sound. “Listening gives you 360 degrees,” he says, noting the joy of navigating between the layers of birdsong that symphonize every day.

Not Just For The Birds

Monarch butterflies travel thousands of miles from all over North America to Mexico, following south the same Appalachian updrafts as birds every fall. Recent research has revealed that monarchs produce two or more short-lived generations over the summer, and these progeny will make another migration across the Appalachians to the East Coast. (That’s 360 degrees of migration for anyone keeping track.)

Bats flap off to a cave and hibernate come winter. They can travel over a hundred miles to find their roosts, using vision, echolocation and the sun for orientation. However, most bats are not adapted for speed or distance, so the summer distribution of bats is limited by the availability of wintering caves.

Spotted Salamanders migrate en masse during the first warm rains or foggy nights in the spring to breeding ponds, often the same ones they were born in. These amphibians and others engage in a phenomenon called “explosive breeding,” wherein tens or hundreds of their kind arrive at a pool. The males leave their sperm packets and the females suck them up with their cloacas to fertilize the eggs internally.