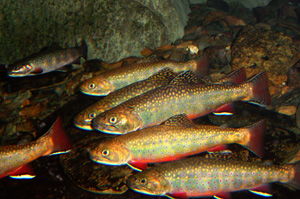 Brook trout south of the New River in Virginia are genetically distinct from brook trout further north. The genetic split took place at the end of the last ice age more than 10,000 years ago. Photo by Jim Habera, Tennessee Wildlife Resources Agency.

Although they only occupy about 25 percent of their historic range, southern brook trout are doing alright, says Jim Habera, a cold water fisheries biologist for the Tennessee Wildlife Resources Agency. He has worked on every brook trout stream in the eastern part of the state, and the remaining population has stayed fairly stable in recent decades.

Poor logging and agricultural practices devastated brook trout populations around the turn of the last century. “People didn’t want to wait for brook trout to recolonize,” says Habera. “They said, ‘Let’s just throw some rainbows and browns in there.”’

Cool mountain streams have a finite amount of food available for hungry fish, and once rainbow trout from the American West and brown trout from Europe took hold, the brook trout were at a disadvantage. Those troubles, combined with water pollution, have limited the fish to headwater streams above 3,500 feet in elevation.

Today, biologists have mapped out streams with native southern trout and are careful to introduce the right type, preferably fish from within the same watershed. By restoring habitat, removing invasive trout and re-introducing southern brook trout, state and federal agencies along with nonprofit conservation groups are keeping non-native trout at bay.

In some places, tension persists between anglers fond of rainbow trout and conservation plans that favor the “brookies.” Habera recalls that after area biologists teamed up with the Great Smoky Mountains National Park to clear Lynn Camp Prong of invasive fish and reintroduce brook trout, a few anglers threw large rainbows back into the stream. Not only is that illegal and expensive for wildlife agencies, he says, it defies the principle of returning southern Appalachian fish to the streams that were their evolutionary homes. “We’ve decided, and the public has generally agreed, that we want to manage for native game species.”