The Heated Issue of Prescribed Burns 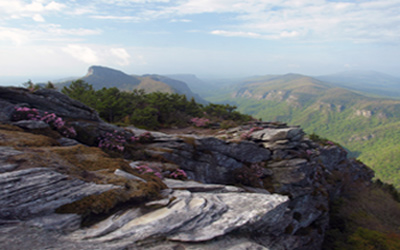 Hot air rises from the Piedmont to make Linville Gorge one of the warmest parts of the southern Blue Ridge. When rain arrives, it drains quickly on the gorge’s steep topography. Photo by Lonnie Crotts.

A few rare species native to the gorge are at the center of a controversial U.S. Forest Service proposal to conduct controlled burns, in stages, on up to 16,000 acres in and around the wilderness.

Natural, lightning-ignited fires used to occur three to five times per decade, says Josh Kelly, a biologist with the nonprofit group Western North Carolina Alliance, which supports the proposal. From the 1950s until 2000, improved backcountry firefighting successfully suppressed wildfires. In the last decade, however, lightning, human carelessness and excess unburned fuel from downed trees have led to several hard-to-control blazes.

Lightning struck Shortoff Mountain in 2007, and the resulting conflagration affected the habitat of mountain golden heather, a flower that only grows on two ridges in the world. Since then, the flower has increased by 200 percent. Some animals benefit too, such as a type of red crossbill that relies on certain pine trees that release more seeds when exposed to fire.

Several regional environmental groups and the forest service say purposefully bringing limited fire to the wilderness will restore ecological balance and give species that are fond of fire an opportunity to thrive. The agency also says that without prescribed burns to limit the amount of small tinder on the forest floor, nearby communities are at increased risk of fire damage from uncontrollable blazes.

She says using fire to prioritize certain species above others is inappropriate in a wilderness area. “Save Linville Gorge Wilderness is not opposing nature doing its work, we’re opposing the Forest Service coming up with nature’s work,” Crotts says.

Kelly, however, says the last 60 years of fire suppression have already altered the gorge, and that prescribed fire could help restore a natural fire cycle to the area.

The Forest Service is putting together an Environmental Assessment of the project that includes alternatives; both will be available for public comment in late spring or summer.