Humanity’s immense influence on the landscape begs the question: How do we best care for the Silent Majority? 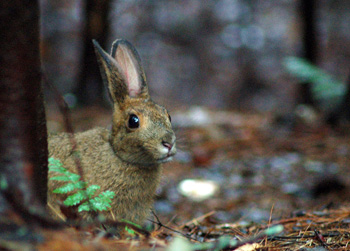 Young forests and meadows with a mix of trees, shrubs and grasses are ideal surroundings for some species, such as rabbits. As landscapes become more divided between human development and protected mature forests, these transitional habitats are growing scarce. Photo by Art Drauglis.

A swarthy tree trunk stands in a small clearing, a gap in the forest canopy created by its once-thick crown of leaves. Shrubs and saplings clamor for sunlight around the tree’s base, and carpenter ants colonize the wood’s damp interior, pushing it closer to decay. Sensing this activity, a pileated woodpecker, with its signature red crest, perches on the trunk, scrapes off bark and begins to excavate a rectangular hole, lapping up ants as it reaches their network of tunnels.

After the bird moves on, the cavity remains. Smaller cavities provide a move-in-ready home for songbirds and bats, while larger roosts make ideal dens for small owls and mammals or the woodpecker itself.

Despite their stature as North America’s largest woodpecker and the distinct drumming of their wood-boring beak, these birds are elusive, as are some of the creatures that dwell, unseen and unheard, in their abandoned cavities. A landowner might see the bare trunk as an eyesore, but every day she postpones chopping it down she supports the community of life that is dependent on the dead tree.

Like their counterparts 150 years ago, residents of Appalachia’s towns, cities and rugged homesteads today live in close proximity to wildlife. Black bears frequent trash cans on Asheville streets, salamanders prowl around backyard creeks in Virginia, and wild turkeys provide dinner for families in Kentucky. But if residents from the 1800s arrived today, they may miss the massive flocks of millions of passenger pigeons that once blanketed the sky, and they would be wary of cougars in forests where their contemporaries walk worry-free.

Early hunters of the passenger pigeon probably never imagined that the continent’s most abundant bird would be extinct by 1914, but between deforestation and an onslaught of overhunting driven by growing cities’ demand for pigeon, the bird disappeared. Similarly, the eastern cougar, or mountain lion, was pushed out of the region by habitat loss and hunting. Cougar sightings are still occasionally reported in Appalachia, but those are widely believed to be western mountain lions that escaped from captivity or Florida panthers roaming beyond their native range. 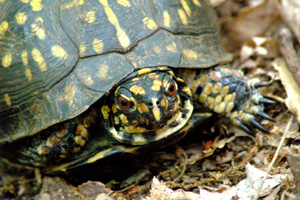 Eastern box turtles are among the creatures that thrive in mixed meadows and young forests. Photo by Art Drauglis.

Although we still have conservation crises aplenty, contemporary policies such as the Endangered Species Act, hunting limits and public land regulations have been life-support systems for much of Appalachia’s wildlife. Elk, river otters and barn owls have been successfully reintroduced to the Great Smoky Mountains National Park. The U.S. Forest Service, which prioritized timber sales over wildlife protection in the 1980s, is now more likely to consider ecological concerns alongside commercial and recreational values. In North Carolina, the Forest Service harvests just 35 percent of the amount of timber that it did 20 years ago.

On private lands, nonprofit land trusts strike agreements with landowners to permanently protect a property’s natural qualities, and therefore wildlife. In January, the Blue Ridge Conservancy in northwestern North Carolina purchased more than 400 acres on the wild and bucolic Pond Mountain and transferred the land to the state. The acreage links state game land with Cherokee National Forest in nearby Tennessee, providing a wildlife migration corridor.

Traditionally, state wildlife managers focused on improving conditions for popular sport animals, such as deer, grouse and turkey. Today, however, those decisions are just as likely to be based around rare species, as both agencies and the public gain a better understanding of the role of small creatures and a sense of pride in Appalachia’s distinct wildlife. Postcard selections at gas stations near tourism areas are now likely to include the primordial hellbender salamander alongside traditional images of mountain wildflowers and playful bear cubs. 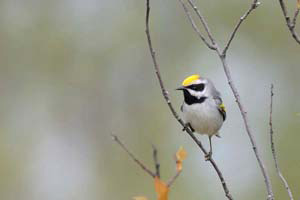 Despite today’s more sophisticated appreciation for the interconnected web of wildlife, learning how to balance protections for individual species and divergent ecosystems is an ongoing struggle.
In Appalachia, the conservation community is grappling with that challenge in the form of a small, brightly accented songbird.

The golden-winged warbler breeds in eastern North America, winters in parts of Central and South America, and is facing devastating habitat loss in both hemispheres.
The warbler was one of seven species nationwide that collectively received $33 million from the U.S. Department of Agriculture in 2012 for conservation efforts on private land. It’s also being considered for federal endangered species listing.

With its black mask and bold yellow wing patches, this bird loves disturbed landscapes near large stretches of forest. Golden-winged warblers and creatures with similar habitat requirements, like the American woodcock, can find refuge on abandoned farmland, a recently burned forest, or other small clearings created by storms or selective timber harvest. And that can create conflicts of interest when it comes to habitat management.

The problem, says Josh Kelly, a biologist with the nonprofit group Western North Carolina Alliance, is that what is good for the golden-winged warbler can be harmful for species that thrive in mature forests, such as the rare small-footed bat or the fragile pink-shell azalea.

He notes that golden-winged warblers respond positively to wildlife managers’ efforts to improve their habitats. That success encourages more projects, funding and publicity, which benefits the warbler. But, Kelly says, activities such as timber harvesting or improving habitat for game species like turkey and deer are also sometimes performed under the guise of protecting this striking songbird.

Meanwhile, Appalachia’s cerulean warbler is in even greater jeopardy and needs mature forest with room to fly, but receives far less funding and attention. “This may be somewhat cynical,” he says, “but I think that the conditions that favor cerulean warblers do not favor resource extraction whereas the conditions that favor golden-winged warblers do favor resource extraction.”

Determining how golden-winged warbler habitats affect other species is “a constant balancing act,” says Todd Fearer, a coordinator with the bird partnership Appalachian Mountains Joint Venture. Some groups have been hopping on the golden-winged warbler bandwagon, he says, but that doesn’t change the fact that there’s a pressing need for creating and protecting the young forestland that this and other species desperately need to survive.

Historically, these patches of young forest might have been created by elk and eastern bison, falling American chestnuts or Native Americans who burned undergrowth to create favorable conditions for wild game. “We need to think very adaptively,” says Fearer. “We can’t return to what the landscape was like historically. We need to look at what we have now and what’s needed to maintain these quickly declining populations.”

Questions such as these are more than just theory for the U.S. Forest Service. In 2012, the agency updated its planning rule, which guides the process each national forest goes through every 15 years to craft a work plan and goals. North Carolina’s Pisgah and Nantahala national forests are among the first in the nation to create a new forest management plan under the new rule.

Stevin Westcott, the agency’s public affairs officer, says that by 2060 the amount of forest on private land in the South is predicted to decline by 11 to 23 million acres. That means the agency needs to create a management plan that’s suited not only for the next 15 years, but for a future where southern national forests will see even more demand from recreation, hunting, resource industries and wildlife.

Understanding the intricacies of environmental interconnectedness and listening for nature’s cues will be critical for society to balance the needs of humans, wildlife and the natural systems that both depend on. In this issue, catch a glimpse of the living underground (p.8) and marvel at Appalachia’s variety of life forms (p.10). Take a journey with migratory mountaineers (p.12) and check in with wild game species (p.16).

As you read these stories, you might do well to keep in mind what Wendell Berry famously said, with one addition: what we do to the land, we to do the wildlife, and we do to ourselves.