On The Fringe of Life

A Tour of Appalachia’s Biodiverse Frontier 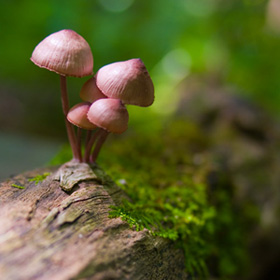 These mushrooms from West Virginia’s New River Gorge are one of countless varieties in Appalachia, a world hub for fungi species. Photo by Jessica Elaine Ulm Anderson.

Crouch Knob in Randolph County, W. Va., might be home to the largest remaining cluster of running buffalo clover in the world. As its name suggests, this particular clover once flourished alongside buffalo, sending “runners” of floral clones across the bison-trodden earth of eastern North America.

In 1825, the last eastern wood bison was killed near the source of West Virginia’s Tygart River. Running buffalo clover also seemed to disappear from the Central Appalachians until a population was rediscovered in the New River Gorge in 1983. Since then, small numbers of the federally endangered flower have been found in several states, typically along trails or in mowed areas where human disturbances echo the buffaloes’ impact on the land. Yet while running buffalo clover might be adjusting to the modern world, its eastern namesake doesn’t have a chance.

Extinction is a natural process as constant as life itself. In Earth’s deep past, however, there are five instances where the rate of extinction soared to more than 75 percent in a relatively short time period and the rate of new species’ emergence decreased. The most recent of these mass extinctions upended the dinosaurs’ reign and made room for the rise of a curious hairless ape that many scientists believe is accelerating extinctions through habitat fragmentation, pollution, introduction of invasive species, spread of disease, outright killing and global climate change. 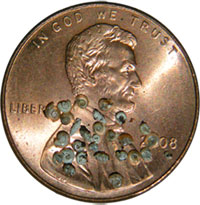 Daniel Douglas of Eastern Kentucky University compared land snails in an old growth forest with snails in a forest that was logged 70 years ago and strip-mined 40 years ago. He found that snail communities had not yet recovered from the disturbances. Photo by Daniel Douglas.


Is the loss of creatures such as the Carolina parakeet — a small parrot that was likely the most colorful bird to grace North America — indicative of a grand extinction to rival that of the dinosaurs, or just another tick mark in evolutionary time? That’s the question posed in a 2011 study by Dr. Anthony Barnosky and others in the journal Nature, titled “Has the Earth’s sixth mass extinction already arrived?” The short answer: It’s quite possible that we’re nearly there.

Nothing speaks to the chill of sudden species loss like the hundreds of frog and toad varieties around the world that are facing extinction. Chytrid, a fungus spread by pet American bullfrogs, among other causes, has hushed swathes of rainforest that were formerly cloaked in the sound of croaking.

“Amphibians are the quintessential canary in a coal mine,” says J.D. Kleopfer, a biologist with the Virginia Department of Game and Inland Fisheries. “We can’t reiterate that enough.” Many amphibians live the first part of their life in water before transitioning to land as an adult, a lifestyle that makes them highly vulnerable to poor water quality.

Frogs in Virginia are doing fairly well, Kleopfer says, especially compared with their international kin. But he’s aware of the havoc that chytrid is wreaking across the globe, and is keeping a watch on amphibian health at home. Recently, Virginia biologists received reports of sudden spates of wood frog deaths, primarily in mid-Atlantic Appalachia. The wood frogs appear to be victims of the hemorrhage-causing ranavirus, a potential peril that Kleopfer’s team will begin investigating this February.

Frogs are just one of Appalachia’s amphibian indicators — salamanders are frequently heralded as the epitome of Appalachian biodiversity. “Nowhere else in the world is there even a close second to the diversity of salamanders as there are in the southern Appalachians,” says Kleopfer.

The eastern hellbender, which can grow to more than two feet long and live up to 30 years in the wild, has been largely unchanged for over 400,000 years. It’s one of many salamanders found only in Appalachia. As a regional mascot, it’s studied more than most mountain life forms. Still, its life processes are just beginning to be understood.

Researchers are finding fewer young hellbenders, and are trying to determine whether juveniles are dying or whether reproduction rates are down. Hellbenders, like many salamanders, take in oxygen through their skin. If erosion from mining, logging or development overwhelms a stream, the sediment can settle on the salamander’s skin and make breathing difficult. In contaminated water, hellbenders also break out with dramatic lesions and skin diseases.

Dr. Kimberly Terrell, a biologist with the Smithsonian Institution is working with Kleopfler and Dr. Bill Hopkins of Virginia Tech to determine how population size, habitat selection and landscape use might be driving the current decline in southwest Virginia’s hellbender populations.

As part of the new study, Terrell is assessing hellbender health — analyzing blood samples, checking for disease, and searching for signs of elevated stress hormones. Long periods of stress caused by changing water temperature or pollutants can lead to reduced hellbender health, possibly affecting the species’ ability to reproduce or fend off disease. Terrell and her partners are pairing their findings in the field with the results of lab studies on how captive hellbenders respond to changes in water temperature. The goal is to learn how hellbenders might respond to chaotic weather and an overall warmer world.

She says the region’s salamanders are resilient to shifts in climate, having survived several mass extinctions, but the pace of man-made environmental change is so rapid that species are struggling to keep up genetically.

Tierra Curry, a biologist with the Center for Biological Diversity, grew up in southeast Kentucky, a place she describes as “saturated and seeping and teeming with life.” In addition to salamanders, the region harbors rare fish such as the diamond darter, whose range has decreased from five states to a single river in West Virginia. It’s also one of the few darters that produces sounds and “talks.” Some of the same activities that threaten this endangered species, such as mountaintop removal coal mining and poorly planned development, also make it difficult for scientists to assess the region’s biological richness.

“Appalachia and especially the coalfields are understudied and under-surveyed,” Curry says. “We very easily could have lost mussel and crayfish and salamander species to extinction before they were even discovered or surveyed just because of the level of devastation.”
Without knowing the full scope of the region’s biodiversity, it’s hard to know how one species’ struggles might impact another. Appalachia is a global epicenter of freshwater mussels, which depend on a few specific fish to help them reproduce. A freshwater mussel will create a lure that looks like prey to the mussel’s favored host fish. As the fish draws near, the mussel sprays fertilized eggs onto the fish’s gills, where the eggs dwell until they reach maturity. If a dam prevents host fish from reaching certain mussels, or if erosion clouds the water with dirt and the fish can’t see the mussels’ lures, the mussels can’t reproduce.

“Slime molds are among the key players in nutrient cycling in soils, and without soil the whole system collapses,” says Dr. Steven Stephenson, author of the new book “A Natural History of the Central Appalachians.” “But only in the last 10 years have people begun to realize that, ‘Wow! Slime molds are here and they’re doing a lot for us.’”

The slime mold affiliated with the embattled American chestnut seems to be on its way out, he says, and the mold associated with red spruce might also find itself in trouble as the cold-loving spruce faces warmer conditions. “The more we look at it the more we realize that some of these seemingly insignificant groups are actually ecologically very important,” Stephenson says.

Stephenson wouldn’t have to convince Dr. Ernest Bernard, an entomologist at the University of Tennessee in Knoxville. Bernard began studying small wingless insects called springtails in the early ‘90s, and has been contributing to the Great Smoky Mountains National Park’s groundbreaking All-Taxa Biological Inventory since its inception 15 years ago. The massive biodiversity survey, the first of its kind, has resulted in the discovery of 923 species that are new to science, 7,636 that are new to the Smokies, and inspired a series of similar inventories around the country.

In examining the soil-dwelling organisms, says Bernard, “I came to the realization that the whole continent is really under-collected for insects.” Sixty new springtail species have been found in the Smokies, and Bernard has even found new species on the university campus.

Some of the species he’s found in the national park are anomalies in North America — their nearest cousins are oceans away. “Apparently the park has been enough of a refuge for them to survive all this time,” he says. “They might have been more widespread millions of years ago, but this is where they’re hanging on, here in the Smokies.”

With so much left to discover, it’s hard to know what the multitudes of microscopic life might convey about the health of the ecosystems that are built on their backs. But if small amphibians are the canary in a coal mine when it comes to the health of the planet, perhaps these tinier life forms also have a story to tell.

Since Europeans arrived, excessive hunting and deforestation has led to the demise of a number of Appalachian creatures. Read more here.