Is Environmental News Fit to Print? 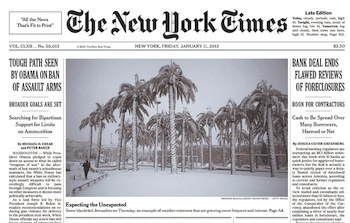 The same day The New York Times announced it was closing its environment desk and restructuring its environmental coverage, the paper ran a front-page photo of snow in Jerusalem. The caption describes the photo as "an example of weather extremes that are growing more frequent and more intense." Photo via Newseum

The New York Times has announced it will close its nine-member environment desk over the next few weeks and assign its environment staff to other departments, according to Katherine Bagley for InsideClimate News.

The best environmental coverage often depends on reporters and editors who are dedicated to the beat. They are experts in their fields. They have reliable sources, know the history of an issue, know what questions to ask and how to navigate sometimes conflicting scientific reports and long policy papers to provide the full scope of complicated issues that readers need. Although the paper’s managing editor for news operations told Bagley that the Times will continue to cover environment and climate, the fact that no one at one of America’s most prominent newspapers will apparently be focused solely on environmental reporting is disturbing.

As Margaret Sullivan, the Times’ public editor, told Fox News: “Symbolically, this is bad news. And symbolism matters – it shows a commitment and an intensity of interest in a crucially important topic. If coverage of the environment is not to suffer, a lot of people – including The Times’s highest ranking editors — are going to have to make sure that it doesn’t.”

Andrew Revkin, who explores climate issues for the paper’s Dot Earth blog, said he “mostly” believes the editors when they say they are not backing away from environmental coverage but rather redistributing the beat in a way that reflects how environmental issues touch on business, politics, technology, science, and so forth. “In a century when the roots of environmental problems often lie half a planet away (consider the ivory trade, or the contribution of greenhouse gases and soot to Arctic ice melting) what’s needed most is collaborative post-departmental journalism, not individual desks and editors competing for the front page.”

News that the New York Times is closing its environmental desk comes just a week after The Daily Climate reported that worldwide coverage of climate change continued a three-year slide in 2012—and that among the five largest U.S. dailies, the Times published the most stories and had the biggest increase in coverage.

It remains to be seen how the structural change at the Times impacts its environmental coverage, and how — or whether — that coverage impacts the public discussion as it once did. That’s why it’s more important than ever for those who care about what’s happening to our world to seek out solid, reliable environmental information and share it with friends and colleagues.