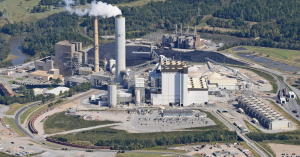 As we ring in the New Year, Duke Energy is touting three facilities that came online at the end of 2012 with a combined capacity of 2,365 megawatts of new generation. The newly operational units include the Cliffside Power Station Unit 6, and natural gas-fired units at the Dan River Power Station and the H.F. Lee Plant.

The new unit at Cliffside, which Duke calls “state-of-the-art” and “the cleanest pulverized coal plant in the country,” could be the last coal-burning unit to be built in the state due to cost-prohibitive regulations on new coal plants. It began commercial operation on Dec. 30, replacing four 1940s-era coal units that were retired in October 2011.

Located about an hour west of Charlotte, N.C., in Cleveland County, plans for the Cliffside Power Station expansion were mired in controversy beginning in 2007. Much of the criticism was aimed at the N.C. Utilities Commission, which was seen as rushing the permitting process for the new units at Cliffside. Thousands of letters and comments by North Carolina residents were sent to the commission opposing the $2.2 billion project. Eventually, only one of the two proposed units was approved by the commission.

The transition from coal to natural gas was completed at Duke’s 620-megawatt Dan River plant in Eden, N.C., where three coal-fired units that operated since the late ’40s were retired in 2012. The $720 million combined cycle plant went into commercial operation Dec. 10.

Duke Energy has also received approval from the N.C. Utilities Commission to convert the Sutton Steam Station in Wilmington, N.C., to a 625-megawatt natural gas plant, which is expected to be completed by the end of this year. The new natural gas plants are part of a “modernization” strategy by Duke and Progress to replace coal-burning plants with more efficient natural gas facilities.

The new units precede a rate increase expected to go into effect in early February. Although the utility originally planned to file for the rate increase last year, fallout over the $32 billion dollar purchase of Progress and a bombshell announcement that former Progress CEO Bill Johnson would not head the merged company led to the delay. Likewise, Progress asked the utilities commission last year for an overall rate increase of 11 percent on ratepayers in North Carolina. If that amount is approved by regulators, residential customers could see an increase of more than 14 percent, while industrial and commercial customers could see a nine percent hike.

The increased revenue will be used to help pay for the new capacity and upgrades to the utilities’ transmission infrastructure.