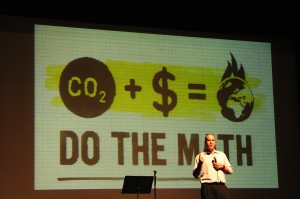 Executive director of The Sierra Club, Michael Brune, speaks at the 350.org "Do the Math" tour stop in Durham, N.C.

On Monday, author and environmentalist Bill McKibben and 350.org’s climate change roadshow, the “Do the Math” tour, packed the Page Auditorium at Duke University. The energy in the room was high, the crowd was diverse and full of familiar faces, and maybe I’m just biased, but my younger brother and I couldn’t help but recognize the strength of North Carolina’s environmental community. As we settled into our seats, the house lights dimmed and, anticipating McKibben’s speech, the fellow sitting behind us whispered, “If he gets too gloom and doom, I’m leaving.”

McKibben has become well-known for presenting the stark reality of climate change and the challenges we face in the simplest terms possible. By his own admission as he took the stage, his basic role in life “is to bum people out.” Fortunately, for the group behind me and any other eco-anxious attendees, the “Do the Math” tour isn’t about gloom and doom, it’s about getting down to brass tacks. It’s about going on the offensive, and after fossil fuel companies. Or as McKibben said, the “fossil fuel industry is wrecking the future, so we’re going to take away their money.”

That’s exactly the message of the “Do the Math” tour: If it is not OK to wreck the planet, it is not OK to profit from it. So we, especially universities and large institutions, should divest from them. McKibben put it more eloquently in his most recent column for Orion magazine when he wrote that “It’s completely nonsensical for [universities] to pay for educations with investments that will guarantee there’s no planet on which to make that learning count. Pension funds can’t sensibly safeguard people’s retirements by investing in companies that wreck the future.”

The evening began as one might assume, with a survey of climate change as we know it today, including special treatment given to Hurricane Sandy. Guest speaker Michael Brune, the executive director of The Sierra Club, took the stage to tell a personal story of returning to his childhood home in Chadwick Beach, N.J., with his parents 10 days after the storm. He remarked that not only are Americans ready for climate action in the face of unprecedented Frankenstorms, wildfires and drought, but that the spell has been broken and around the country, we can see examples of investments in renewables and energy efficiency paying off. I’ve learned not to underestimate the power of a potent mixture of alarmism and hope, or it’s effectiveness in setting the stage for a speaker, in this case 350.org’s commander-in-chief. 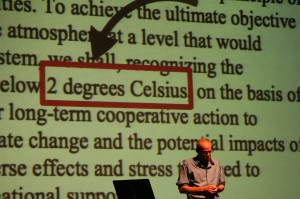 Author Bill McKibben simplifies the math for the audience at Duke University.

McKibben is an extraordinarily upstanding figure considering his prominence over the past two decades; which is to say, if the fossil fuel industry hasn’t found what it needs to defame him yet, they probably never will. From writing The End of Nature in 1989 to being arrested with more than 1000 others while protested the Keystone XL pipeline last year, McKibben has become somewhat of a de facto leader of the environmental movement. And now he’s riding around the country in a bus filling college auditoriums with crowds eager to hear what he has to say — and eager for his leadership.

He spent much of the evening establishing the basis for taking on the fossil fuel using an argument he made in a Rolling Stone article earlier this year called “Global Warming’s Terrifying New Math.” The piece itself focuses on just three numbers that McKibben believes we all need to bear in mind.

– 2 degrees Celsius: The point where climate change will cause “utter calamity.” So far, we’ve raised the average temperature of the planet just under 0.8 degrees Celsius, and that has caused far more damage than most scientists expected. By the admission of more than 160 nations that signed on to the Copenhagen Accord, 2 degrees Celsius represents a situation of long-term disaster, where island nations would succumb to rising seas and drought-stricken nations would be left without recourse.

– 565 gigatons of CO2: The estimated amount of CO2 emissions it will take to reach 2 degrees Celsius.

– 2795 gigatons of CO2: The provable reserves of fossil fuel companies, or in other words, what they have and are willing to burn. Big Oil and King Coal like to keep these numbers handy, even as millions are spent every day searching for untapped reserves. These are the numbers that create the twinkle in the eyes ofinvestment banks and corporations that help to keep the profits rolling in. As McKibben says, these reserves are “underground physically, but above ground economically.”

Climatologists have crunched the heavy numbers for us, and this is what we’re left with — math that any Duke student, or for that matter, a fourth-grader, could do in their sleep. Even the International Energy Administration in it’s World Energy Outlook report, which was released last week, claims that “No more than one-third of proven reserves of fossil fuels can be consumed prior to 2050 if the world is to achieve the 2 °C goal.” The thing is, with the exception of 2009, carbon emissions are increasing globally. And even if we stopped increasing CO2 now, the temperature would likely still rise another 0.8 degrees, according to McKibben’s piece in Rolling Stone, putting us three-quarters of the way to the 2 degree bottom line. Suddenly, the fiscal cliff doesn’t seem as scary. I think it was around this time that I turned around to see if the seat behind me had been quietly vacated.

Once he had the crowd thoroughly terrified, McKibben switched gears to the core message of the tour: large scale divestment from the fossil fuel industry. Since fossil fuel interests seem to only understand the logic of money, McKibben says, we should show them we have the power to change that logic. 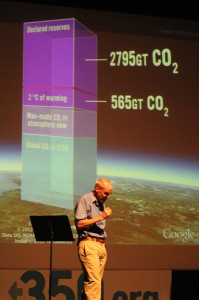 Adding the big three. Extractive industries will have to leave nearly 80 percent of their proven reserves in the ground to avoid raising global temperature 2 degrees Celsius.

I’d bet that everyone in the crowd that night accepts the threat of climate change as a moral issue, not an “engineering problem with engineering solutions,” as the CEO of ExxonMobil, Rex Tillerson, claims. This could explain why the “Do the Math” divestment strategy is based on one of the great moral triumphs of the 20th century.

In the 1980s, student and faculty at universities in the United States and the United Kingdom put pressure on their boards of directors to divest from companies that profited from apartheid, an action supported by Archbishop Desmond Tutu who rose to prominence during the anti-apartheid movement and who has shared his support for 350.org’s retooling of the strategy. As South Africa’s currency began to plummet, the pressure urged government reform. The University of California-Berkeley alone withdrew three billion dollars worth of investments from the apartheid state. The “Do the Math” tour encourages students, faculty and alumni alike to view fossil fuels companies as the same moral stigma that apartheid represented to universities in the 1980s.

Like corporations that profited from apartheid, McKibben said that fossil fuel companies deserve to have their social licence revoked. He claims their veneer of responsibility continues to erode as more people support taking action against climate change. He called out the names of every major university in the state to cheers from various corners of the room. It was the grand call the action the night had been building up to, for students from universities around the country to follow in the footsteps of Harvard, Unity College and others, by organizing and beginning to divest on an unprecedented scale.

“We’re not going to outspend the fossil fuel industry,” McKibben said. “But we have other currencies to work in.

For more on the “Do the Math” tour, visit: 350.org and gofossilfree.org