A new scientific study has confirmed what most Appalachians have known all along: the damaging impacts of mountaintop removal mining extend far beyond the destructive sites themselves. 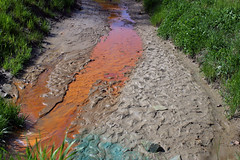 Researchers from Duke and Baylor Universities have found that a decade of mountaintop removal mining has destroyed the aquatic biodiversity of over 1,700 miles of streams in southern West Virginia. Dr. Emily Bernhardt, the study’s lead author, explains that while previous research has analyzed the nature of mountaintop removal’s ecological impacts, this is the first to look into exactly how far-reaching these impacts may be. And the results are not pretty:

After analyzing ten years of maps of a 7,500 square mile area, researchers were able to conclude that when 5% of the land was converted to mountaintop removal mining sites, the resulting mineral and heavy metal pollution was enough to kill so many sensitive aquatic species that 22% of the area’s streams would be considered biologically impaired under West Virginia criteria.

The study also estimates that while valley fills in the area have buried 480 miles of streams, ultimately, the pollution runoff may stretch to around 4 to 6 times as far. Given that previous research has demonstrated the impacts of mountaintop mining pollution on human health, think about what this might also mean for the people living farther downstream.

This is only the latest of many peer-reviewed, published scientific studies that have concluded that mountaintop removal mining damages Appalachia. How much longer can the coal industry and our legislators continue to bury their heads in the sand and blatantly ignore the science?